Atelier 21 is a design studio focused on energy issues, lowtech solutions and energy expertise. For the past 15 years, it has been conducting multiple projects to design and disseminate new energy practices. These projects can take the form of research programmes (to study and experiment alternative solutions), social actions (to help territories and their inhabitants to fight against energy prejudices), or cultural activities (to educate to new energy practices through playful, convivial and sometimes even festive experiences) by mixing arts, sciences and technology. The members of Atelier 21 and its founder, the designer Cédric Carles, strongly believe in collective intelligence and mobilise all actors (citizens, companies and public organisations) to change individual and collective practices in order to meet the growing ecological needs of our society.

The "Act 4 Energy" studio (ENSAD’s year-long transdisciplinary laboratory format ) is run by Atelier 21 and two students in the 5th year of Object Design at the Ecole des Arts Décoratifs: Antoine Tour and Quentin Poudoulec. A place of reflection and Action, it undertakes to bring out new solutions and to enhance existing ones in the context of student precariousness. It contributes to the "Act 4 Energy" initiative, which for two years has been offering workshops for students and considering low-cost emergency solutions to improve the thermal comfort of their homes and reduce their energy consumption. As part of the studio, Atelier 21 has developed a digital platform, the Repair Room, a peer-to-peer tool based on a self-help format that collects a set of experiences and solutions in a shareable and replicable form. A digital chat room on Discord allows students to get information and ask specific questions about food, housing and fuel poverty. 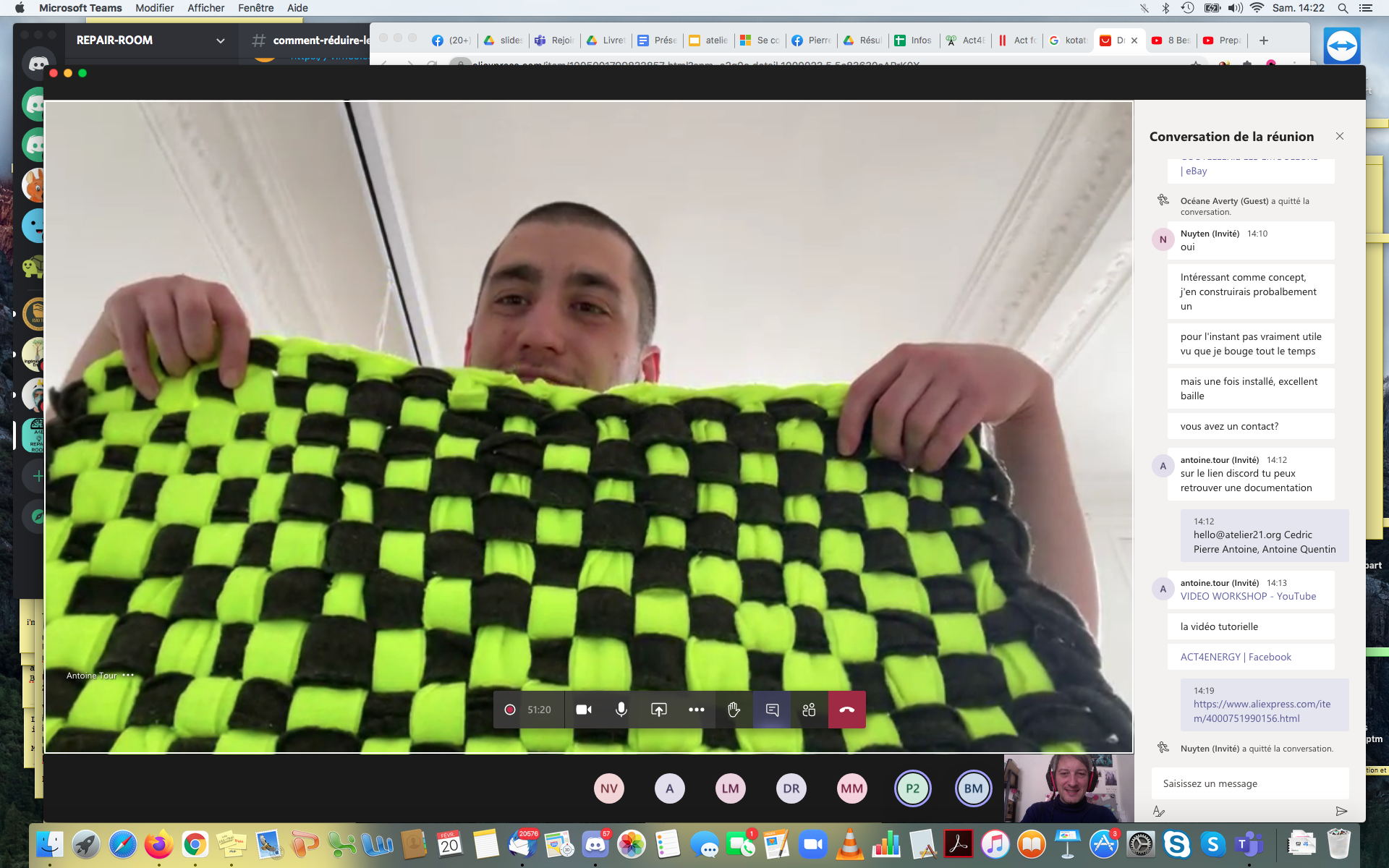 The precariousness of the energy sector, dependent on financial market sectors linked to housing and the privatisation of national companies, means that more and more housing is falling into disrepair due to lack of maintenance, and is becoming a failing and costly structure. In France, the 19th century wave of urban hygienisation replaced the stove of yesteryear by gradually equipping interiors with central heating systems. This paradigm shift from "local heating" to "shared heating" is being questioned for economic and ecological reasons today. Precariousness and the return of shared energy within the home are becoming a real issue. How can we heat better, more responsibly, while respecting our living environments? In the continuity of the research carried out by Atelier 21, the workshop proposes to create a kotatsu, a low-tech Japanese furniture, which allows to heat locally a table, a working space, like the stove or the korsi [Iran]. In addition to proposing a simple initiative to create, the kotatsu can be created on already existing furniture and from textile scraps, thus rationalising the loss of material.
With the collaboration of Antoine Tour 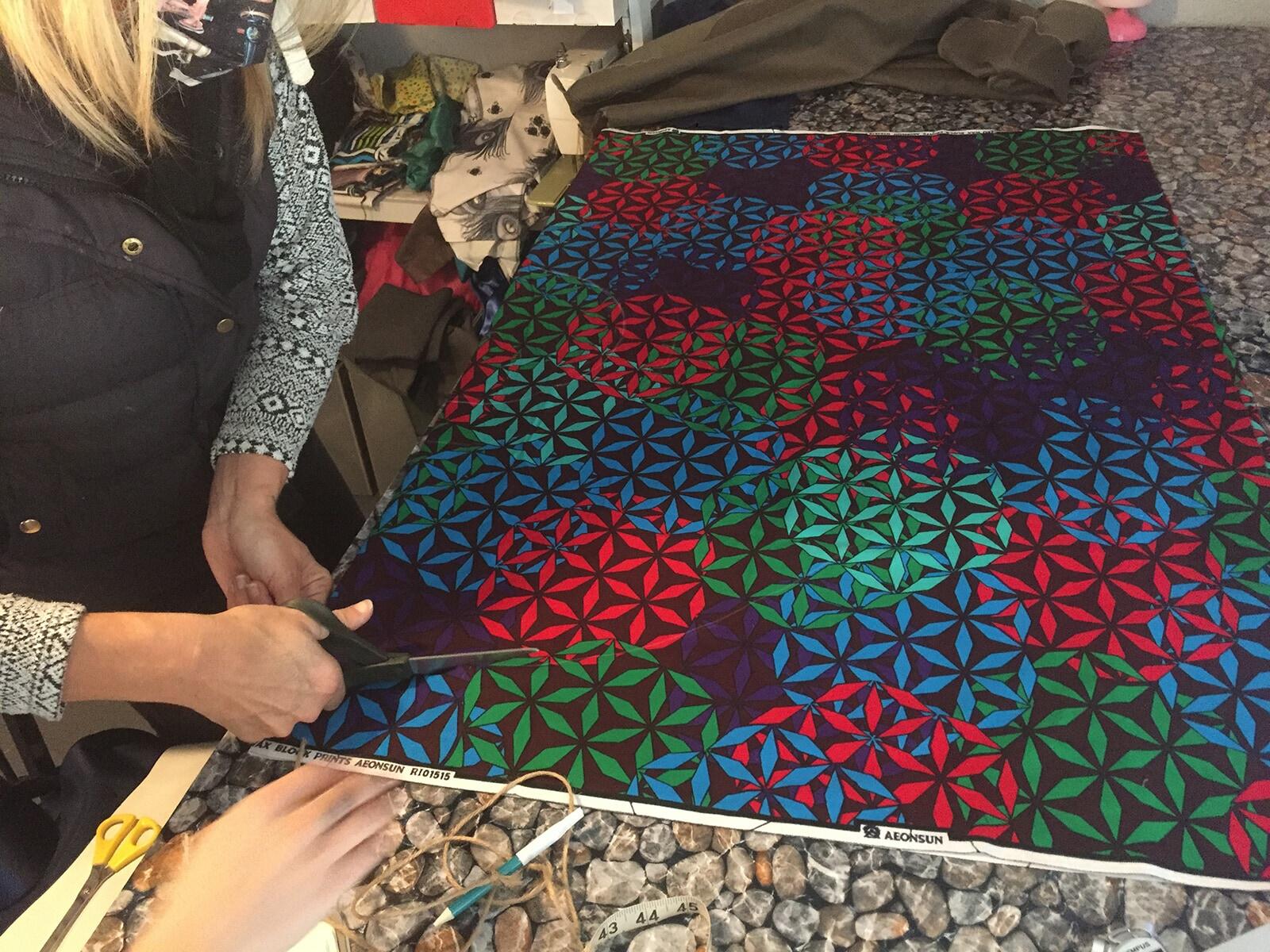 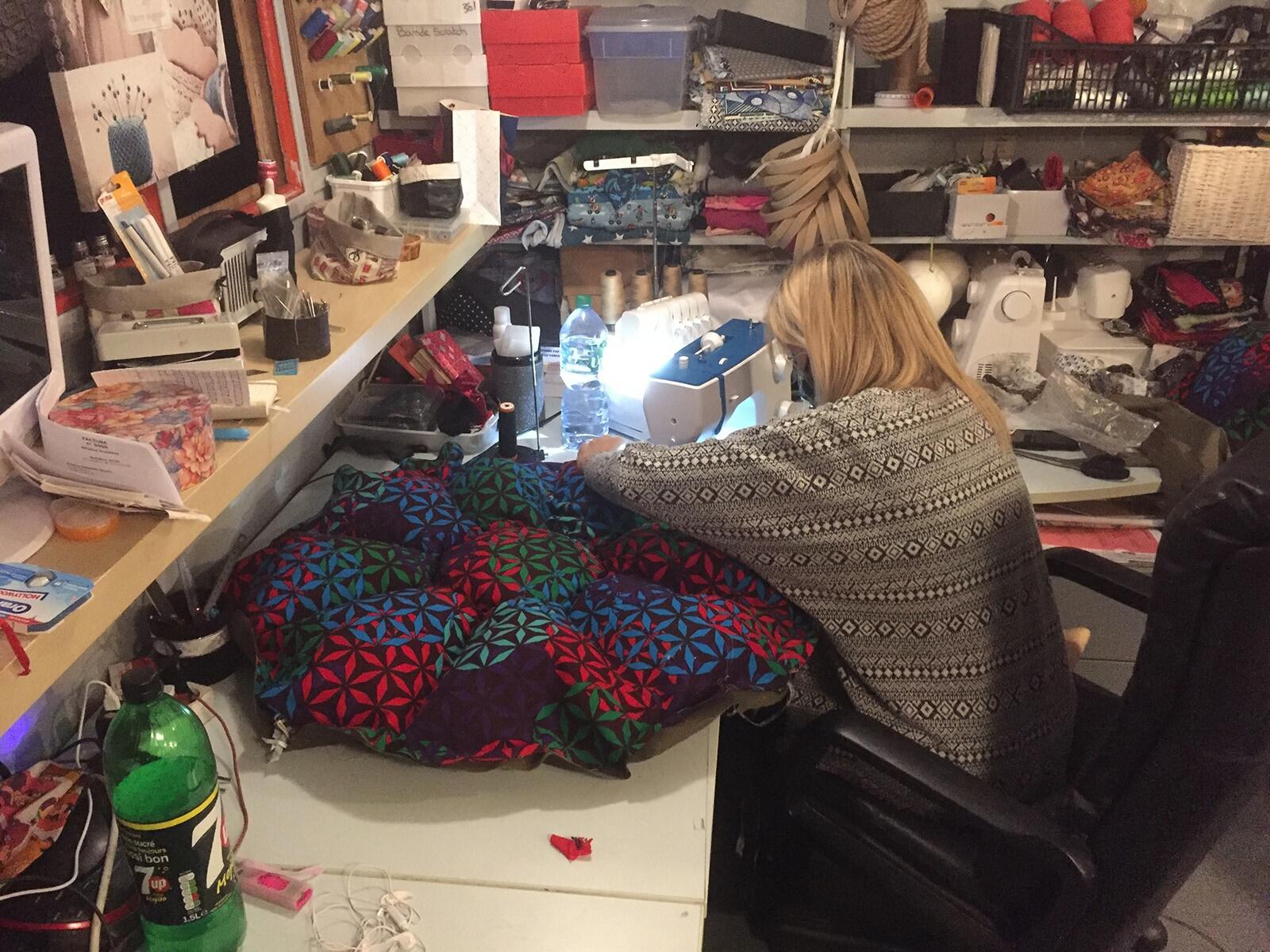 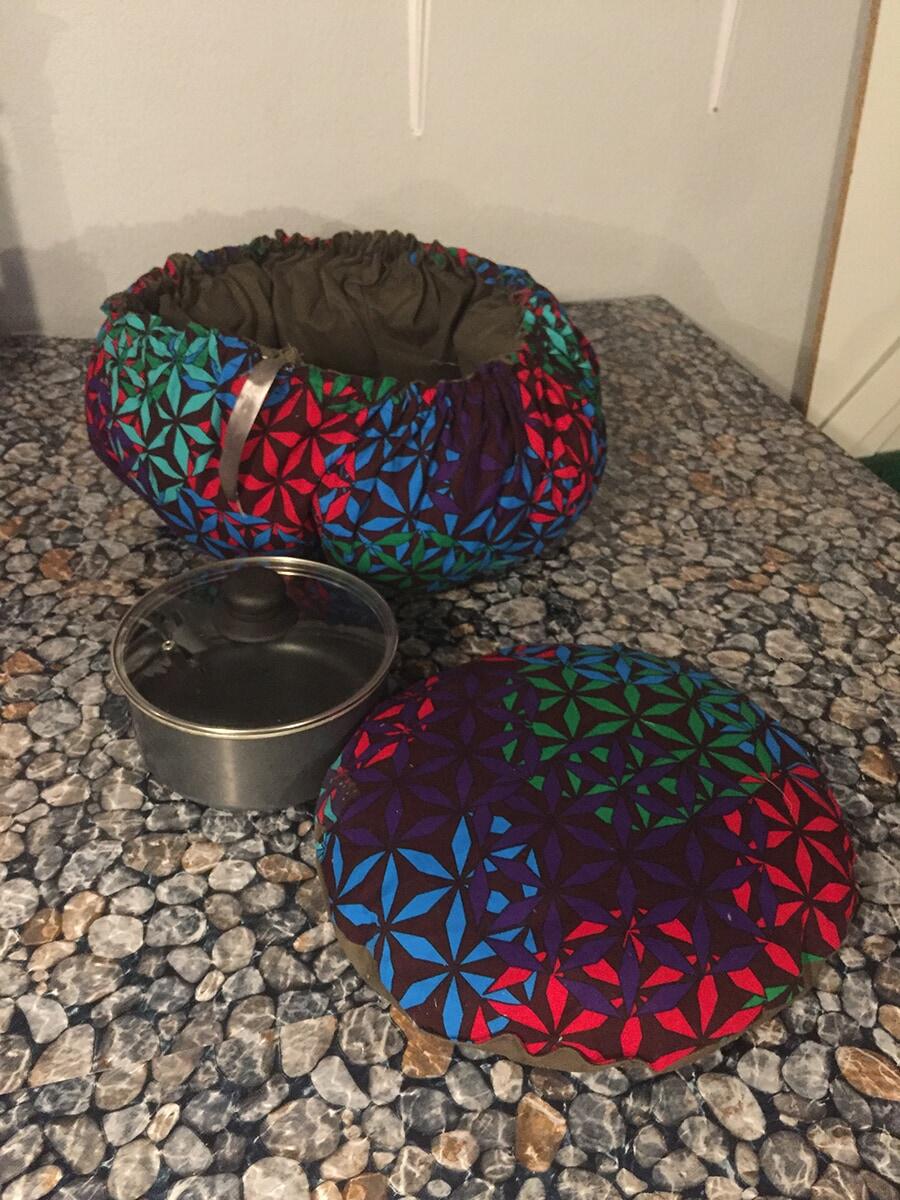 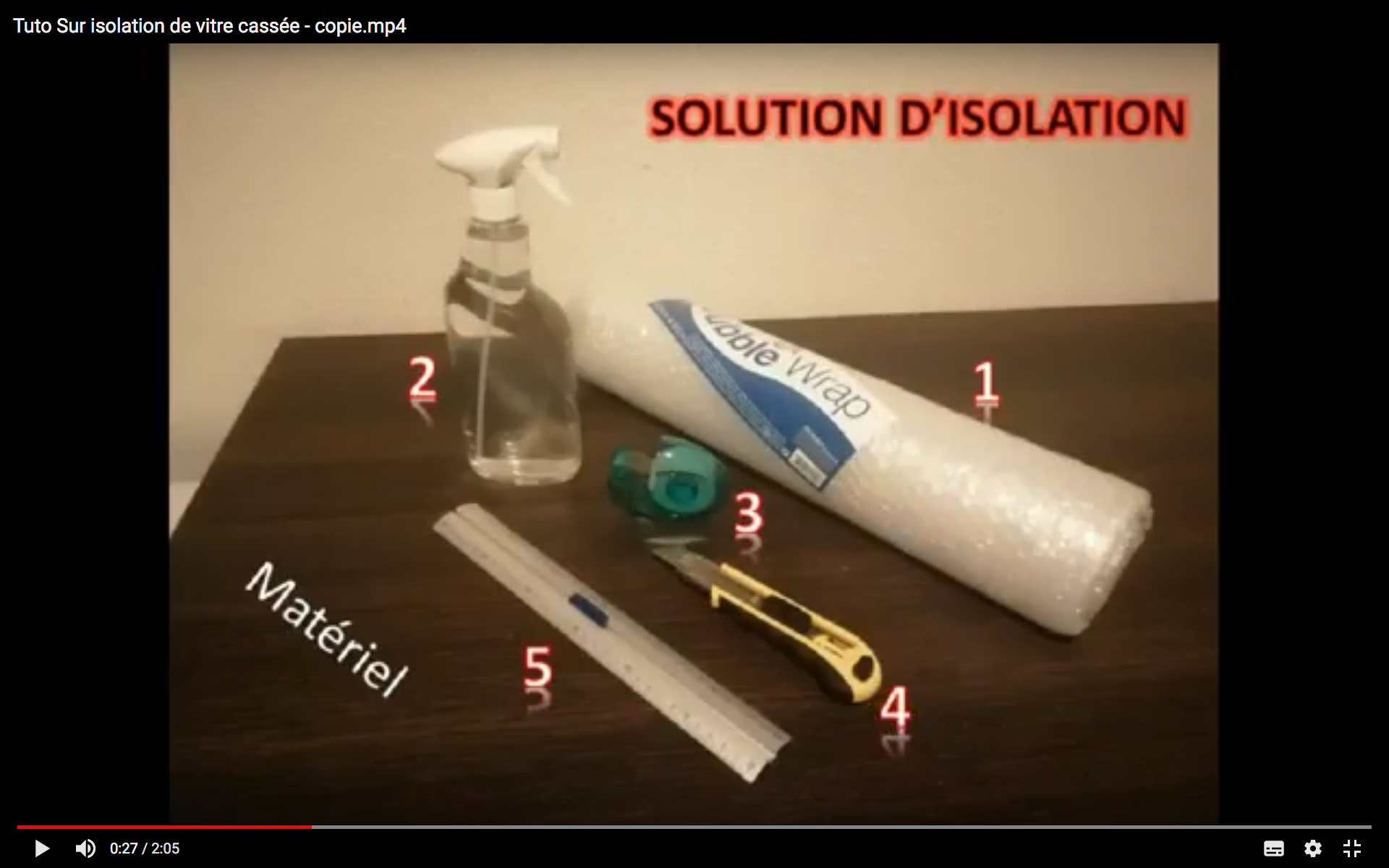 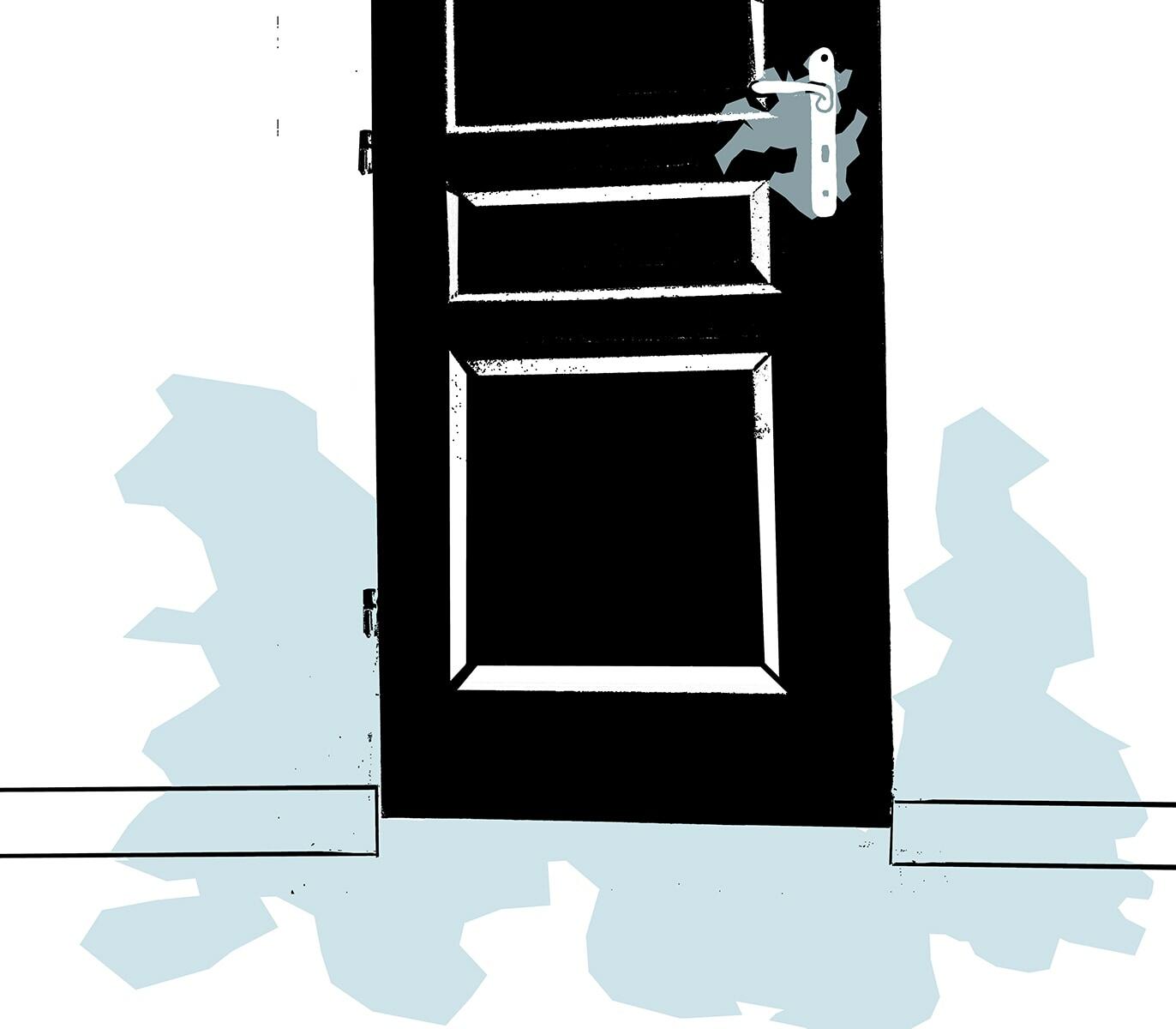 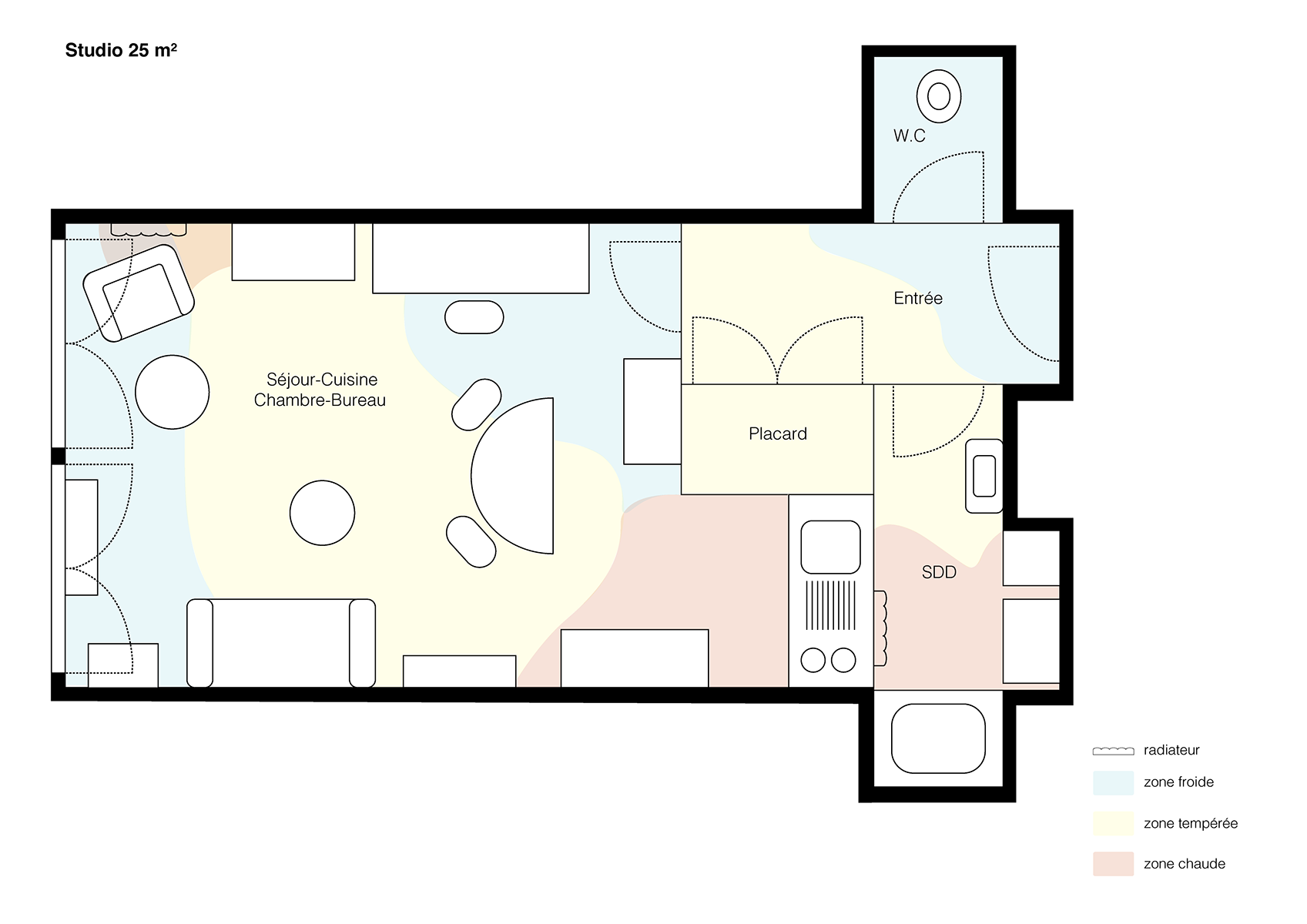 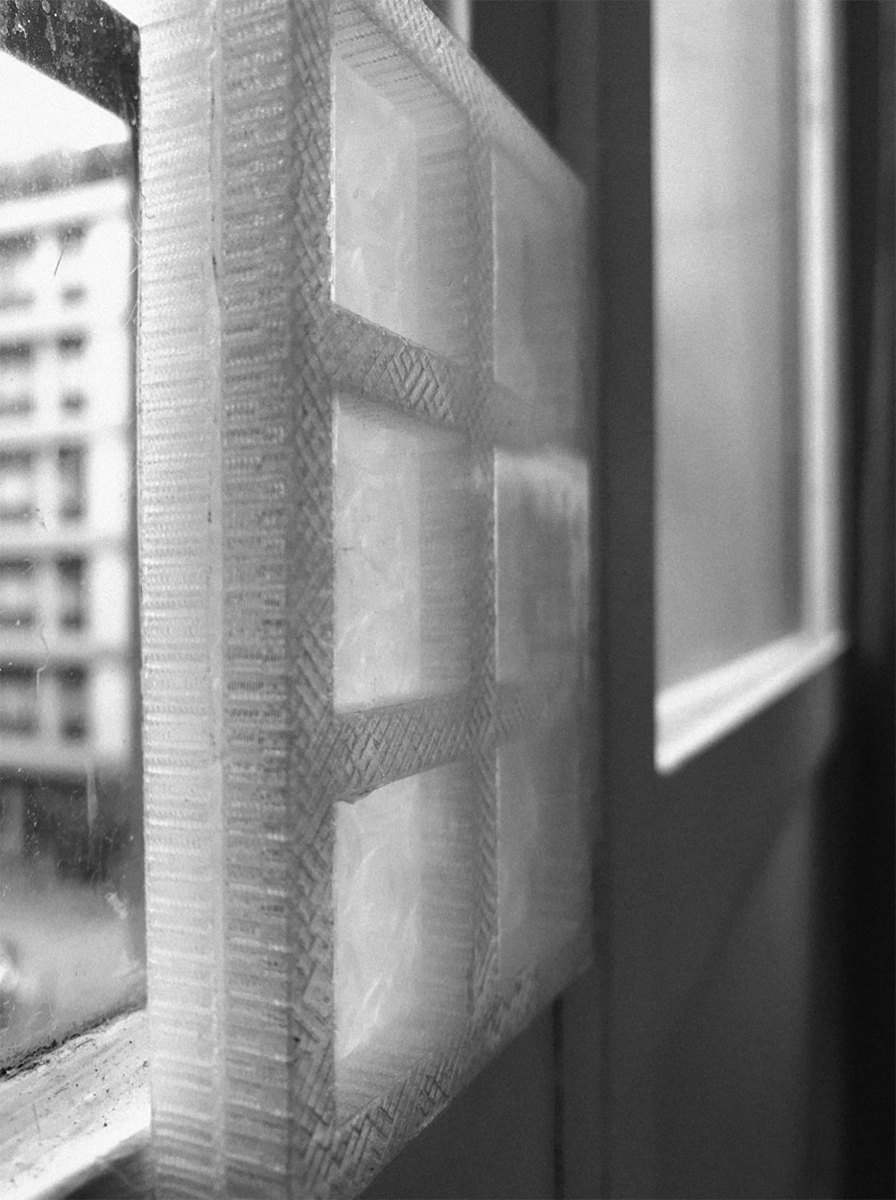 From the MAFE "studio" to the Act 4 Energy "studio

When the "studio" (EnsAD's transdisciplinary laboratory format) was being developed, we had imagined working on the issues of sustainable agriculture, energy and food. The MAFE Memory/Agriculture/Food/Energy "studio" proposed to envisage a more resilient, sustainable and less impactful city, to draw inspiration from the history of innovations in the manner of our research on ancient patents (https://paleo-energetique.org) and to interact with actors in the field, to find concrete ways to act while calling upon the creativity of the students of the studio. The Covid-19 health crisis shook the belief in the resilience of cities and the confidence of citizens in the management of food and energy flows. The confinement and the various economic, social, and psychological crises experienced by French students pushed Atelier 21 to revise the general orientation of the studio and to give it a deep and current resonance by mobilising students on their own emergency, thus giving a concrete meaning to the word action-research. Indeed, in some regions of France, up to 70% of students are in fuel poverty, according to the definition of the ONPE (National Office for the Prevention of Poverty), and in the worst case scenario, this will mean almost two million students by 2023.

Given the context of the "studio", based on the 4Cs project which proposes reflections on culture and creativity in the service of positive social impacts, rather than thinking about the city of tomorrow solely on the theme of agriculture-food-energy as initially planned, we decided to focus the city of now on the urgency of the precariousness experienced by students in France and thus activate the latest of the collaborative research-action initiatives led by Atelier21: Act 4 Energy. Many students are affected by precariousness and Atelier 21 is committed to associations such as AGORAE and LINKEE, which act against food precariousness among students.

The creative "studio" Act 4 Energy, within EnsAD, has become a place of reflection and action with the intention of bringing out new solutions and enhancing some existing ones. Act 4 Energy has been in existence for two years and offers workshops for students to create low-cost emergency solutions to improve the thermal comfort of their homes and reduce their energy consumption. The workshops are carried out according to the problems encountered by the students in their accommodation. Each workshop is followed up with tutorials available online. During the workshops we imagine, prototype and share open-source solutions, tutorials and best practices to improve thermal comfort and save money. Other organisations such as the École Nationale Supérieure des Mines de Paris, the École Supérieure d'Art et de Design d'Orléans, the École Supérieure d'Art et de Design Toulon Provence Méditerranée, the Lycée Condorcet in Montreuil, the FUNLab - FabLab in Tours, are already participating. All Act 4 Energy actions are relayed by networks such as Refedd or the HOPE Chair. The initiative is also supported by Radio Dihaille-Ouailles, a programme co-produced with FUNLab, and broadcast monthly by Radio Campus and Radio Béton about DIY initiatives, solidarity makers and actions launched to respond to the different forms of precariousness (food, energy, IT) among students and more widely among people in precarious situations (young people, families, seniors). During the Act 4 Energy studio at EnsAD, we noticed that student fuel poverty is multiple and that there is therefore a need to focus on listening and providing clear answers to specific needs: humidity, consumption, insulation, implementation of low-tech solutions or legal aid. We therefore decided together to strengthen the initiative by creating the Repair Room digital platform dedicated to helping and supporting people in fuel poverty. The digital permanence provided by this platform resulted in the creation of an online forum, on Discord, allowing students to get information and ask specific questions on food, housing and fuel poverty. Using simple and comprehensive collaborative tools such as a form and a chat that constitute its database, within Act 4 Energy, Atelier 21 and the students have developed a peer-to-peer tool based on a self-help format that collects a set of experiences and solutions in a shareable and replicable form.

In addition to the "studio", a second workshop with fourth year students of the Object Design sector of Ensad, allowed to test these tools and to act around thermal data within student housing in order to improve their humidity conditions, to solve the problems of insalubrity and thermal discomfort, which are typical during the winter period.

Act 4 Energy's reflections led to the addition of a series of kakemonos to the Repair Room digital platform, aimed at improving the communication of the Act 4 Energy project and encouraging mutual aid among students. These kakemonos are an essential part of the initiative and can be used at various student events. The studio also produced objects that could be easily made by the student community thanks to the existence of the platform.