DIGGING FOR THE FUTURE
FRUGAL 19th

The Polimi DESIS Lab has developed the Action “Vocabolario di quartiere” within an urban living-lab called Off Campus NoLo, an initiative of Polisocial (polisocial.polimi.it/it/off-campus/) meant to make the presence of the University in the city of Milan (IT) more tangible and provide it with the possibility to be more open and closed to the territory and its community - and the Action Radio NoLo, a neighborhood radio of NoLo (Milan) developed by the citizens for the neighborhood. Off Campus Nolo is situated into the Public Market of viale Monza spaces, in the Nolo neighborhood. The Polimi DESIS Lab adopts a strategic and systemic approach to design, with a specific focus on design for services and design activism. It has a background in service and product-service-system design for sustainability and investigates the way design can support and trigger social innovation, combining creativity and visioning with the capability of engaging in co-design processes.

The Vocabulary is an ongoing Action-research project exploring ways to generate conversations around key concepts and keywords considered central to the neighbourhood by its inhabitants (human, but also non-human). This results is a series of conversations bringing together the voices of citizens but also of experts, historians, designers, linguists, writers, artists, diverse voices from the world of culture to question the neighboughood’s keywords from multiple perspectives. While the non-human points of view regarding those words is provided by scientists (botanists, zoologists, geologists, microbiologists, etc) a particular attention is made to address more diverse human points of view and give special attention to marginalized communities. By bringing together all these voices researchers intend to identify the radical interdependency connecting the diverse agents inhabiting the contemporary city, redrawing the connection between the environment and the society, particularly focusing on what requires care, what should be cared about, and what the citizens should do to really care. 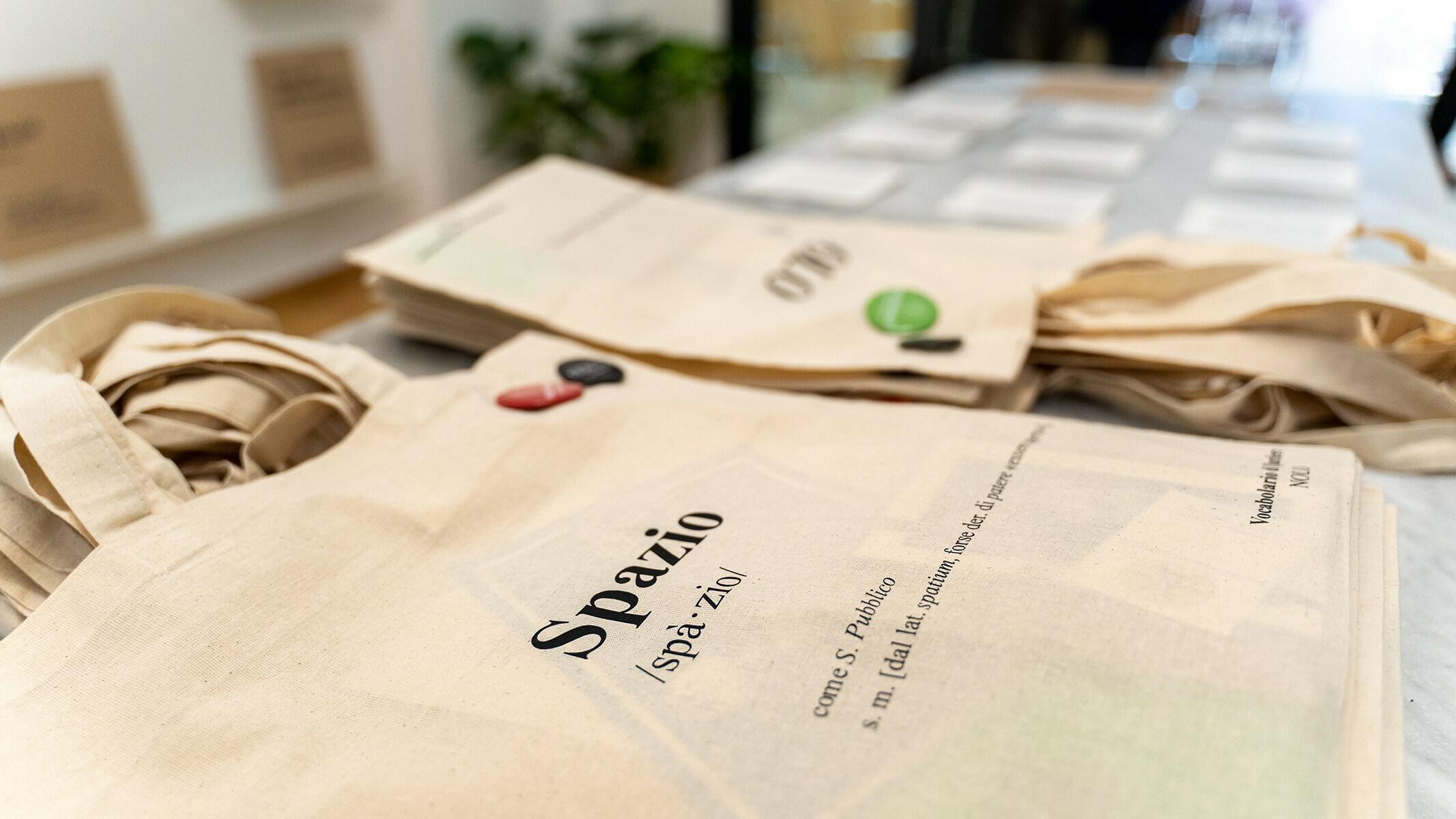 version #1 - February 2020
First graphic prototype of the Neighbourhood Vocabulary resulted from the co-design sessions with Radio NoLo, who selected nine keywords to represent and question the transformation taking place in the neighbourhood. 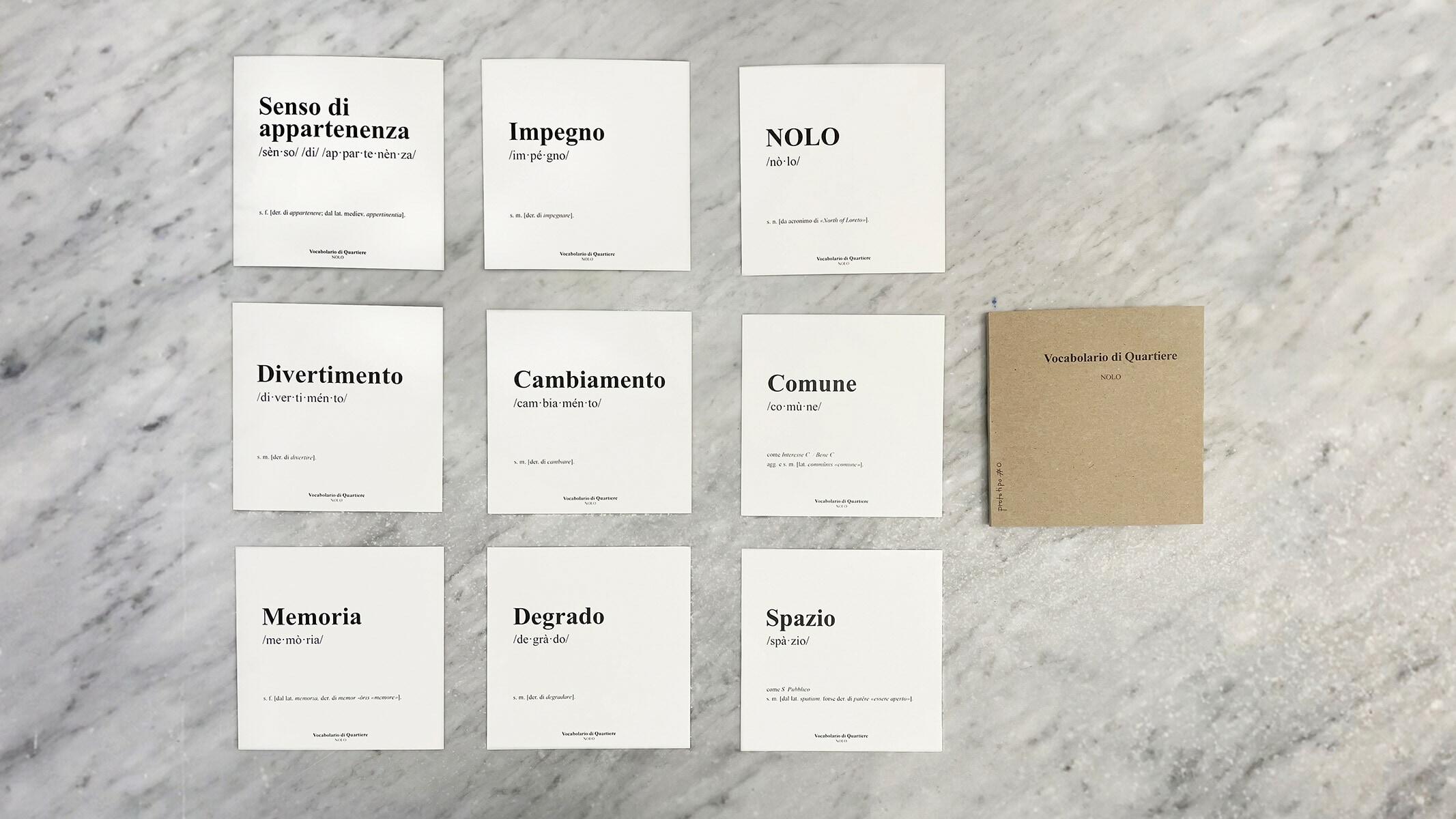 version #2 - September 2020
Graphic re-elaboration of the first prototype for the inauguration of the spaces of Off Campus, the urban lab in the Neighborhood Market of via Monza, NoLo. This Vocabulary contains 10 words (9 chosen from the first vocabulary + one extra word). 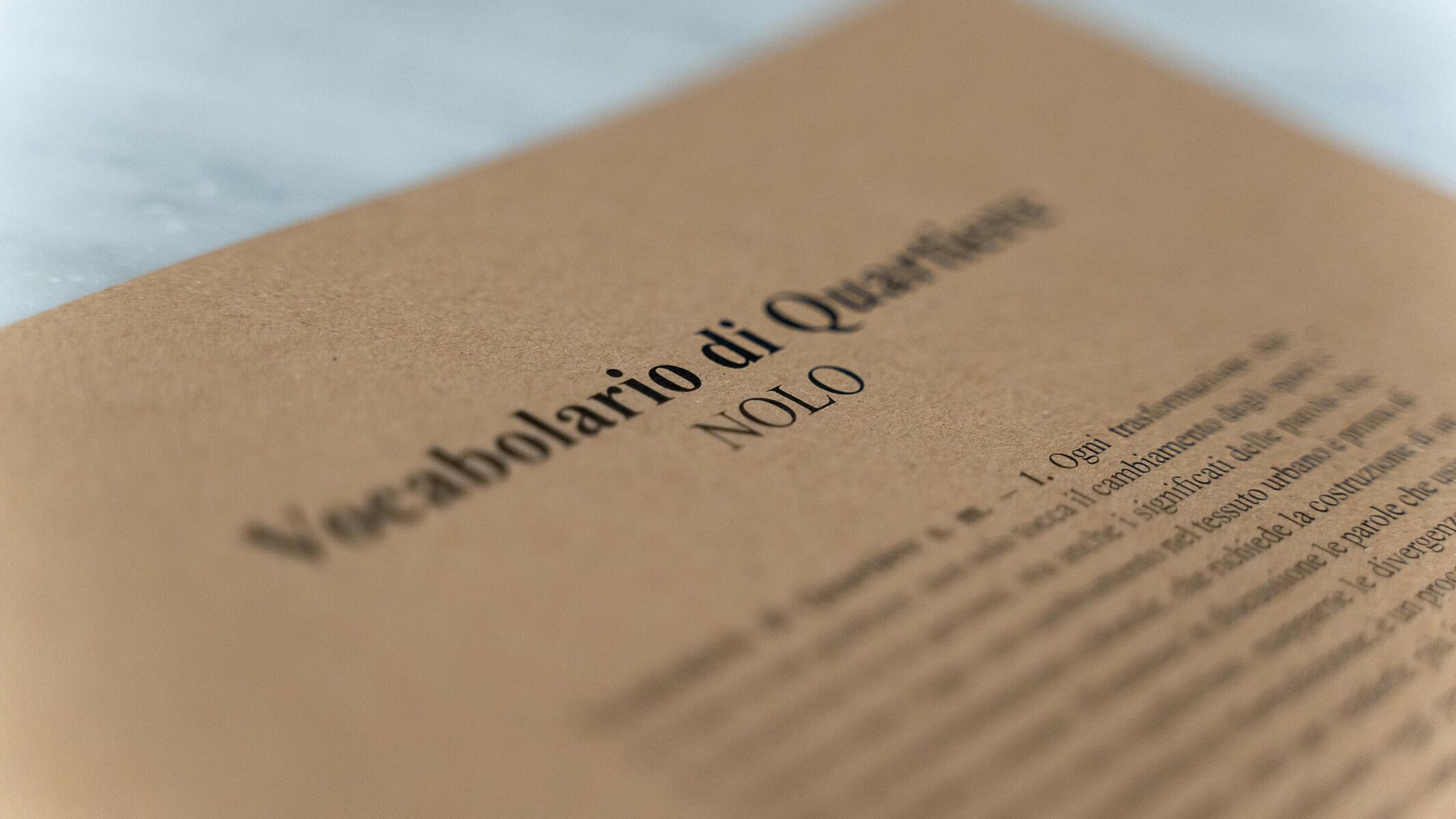 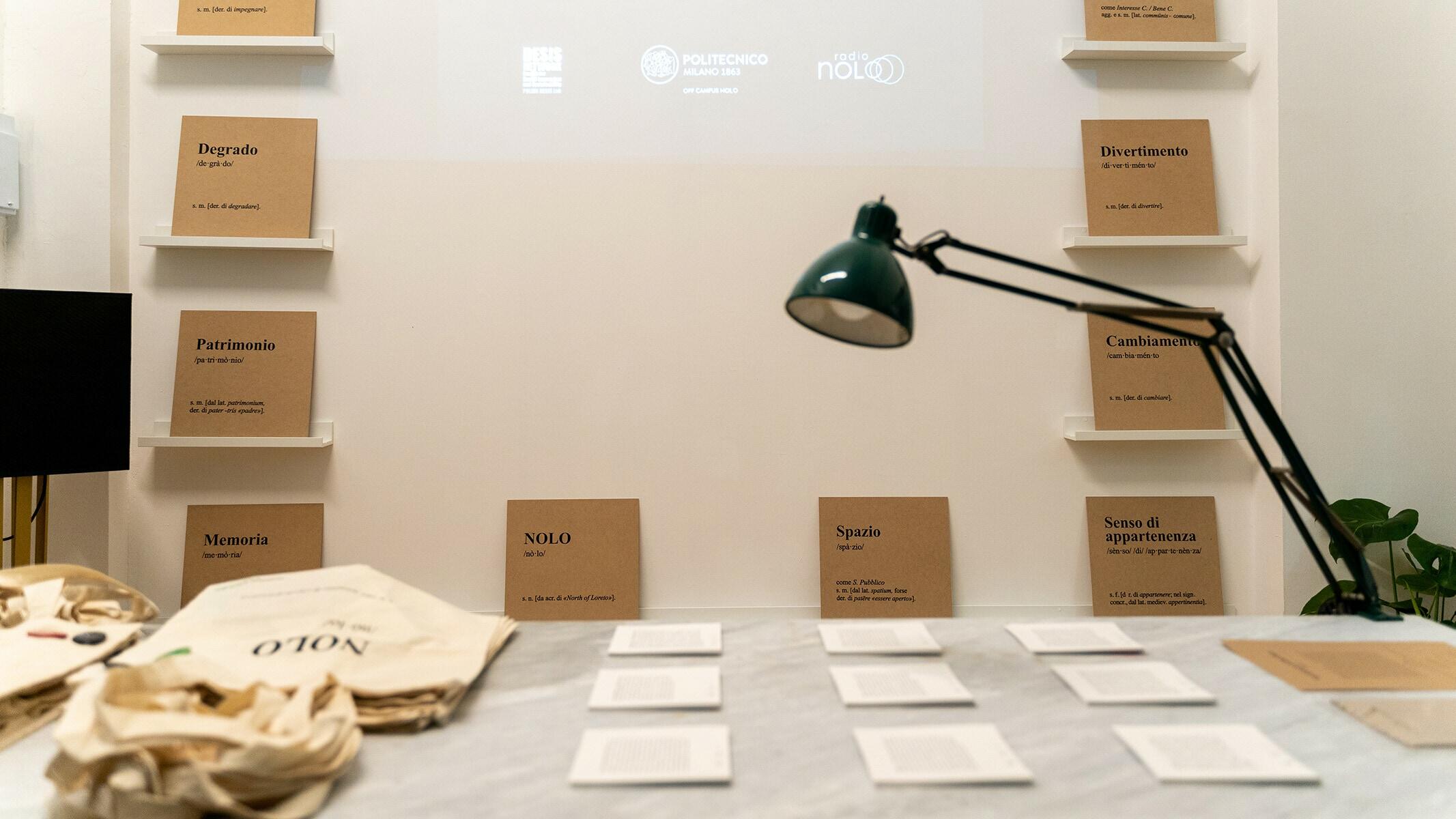 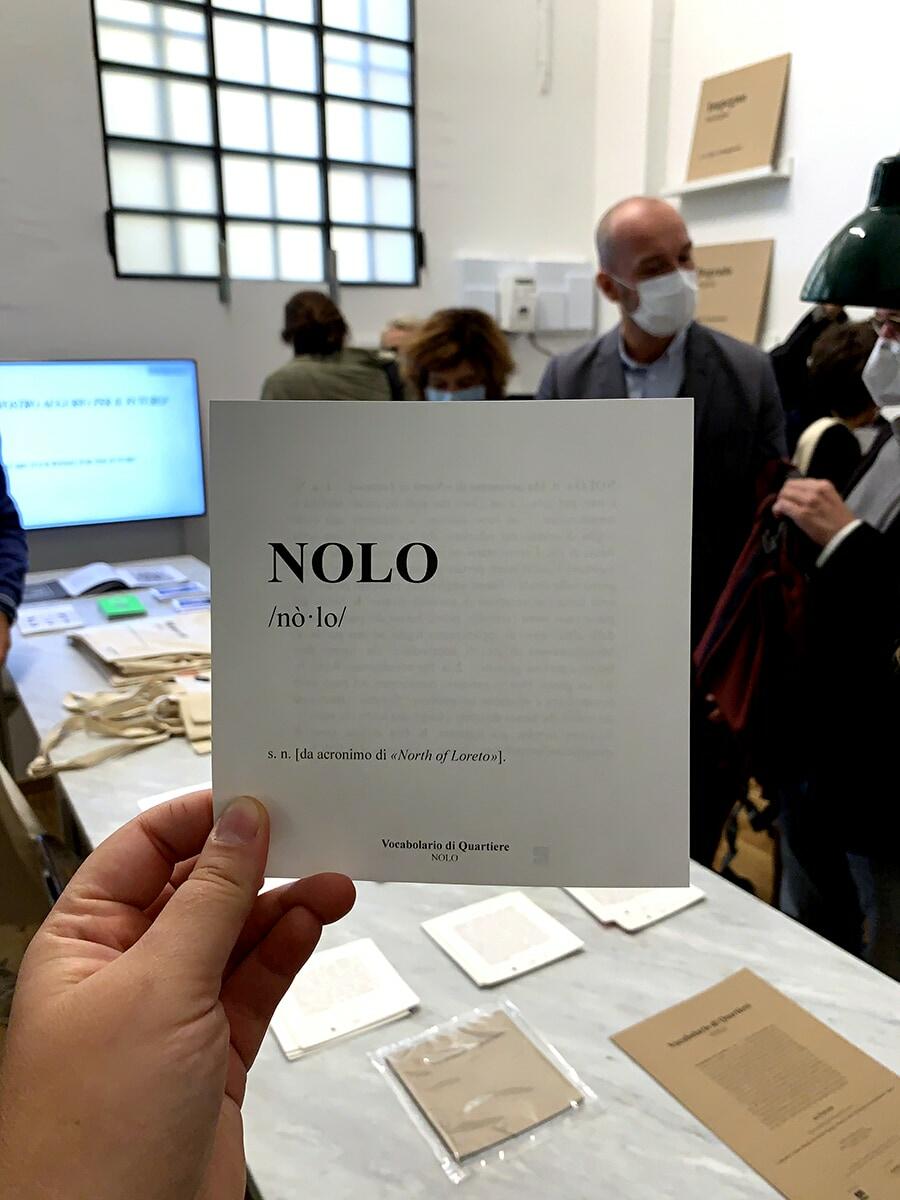 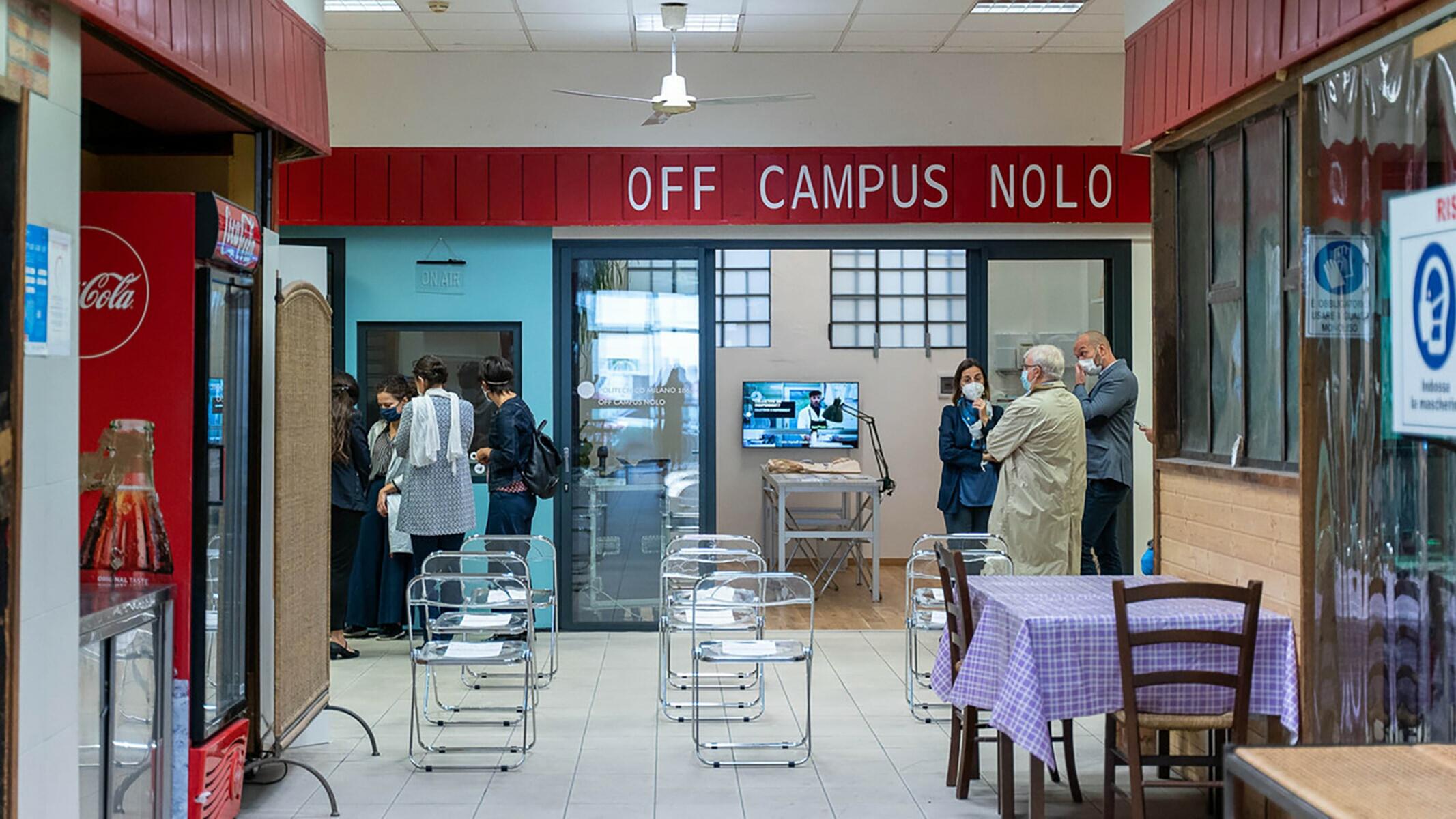 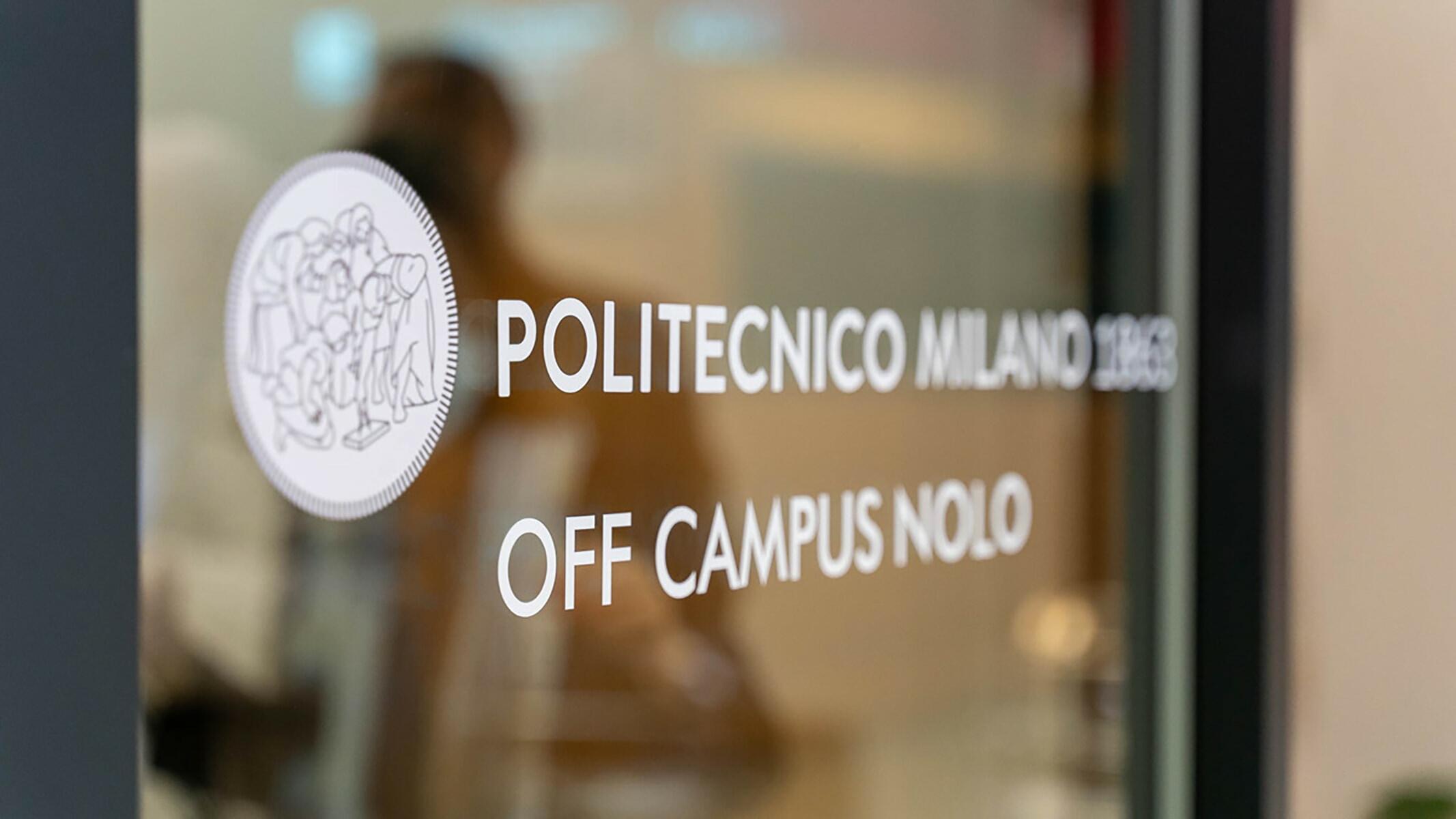 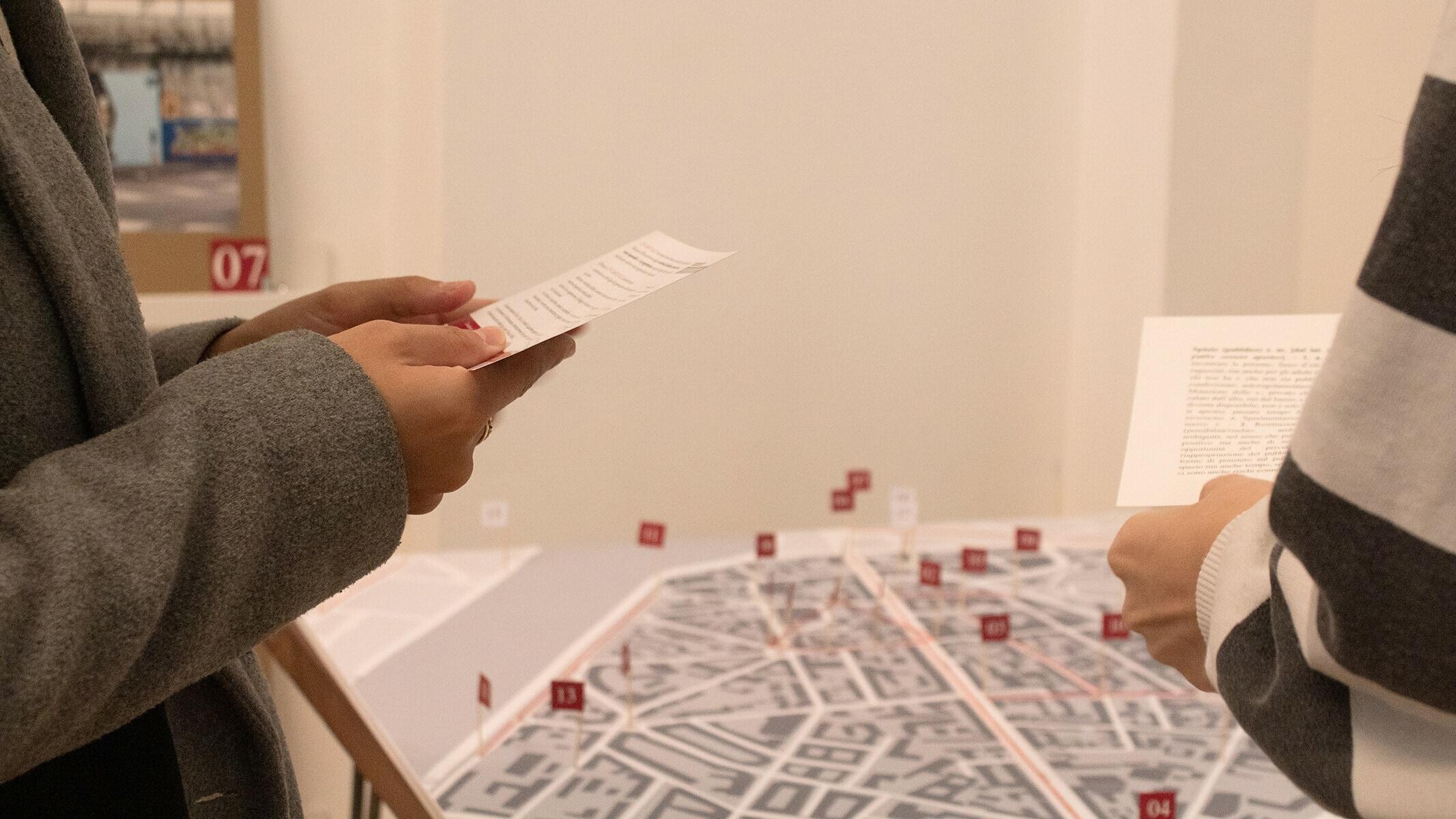 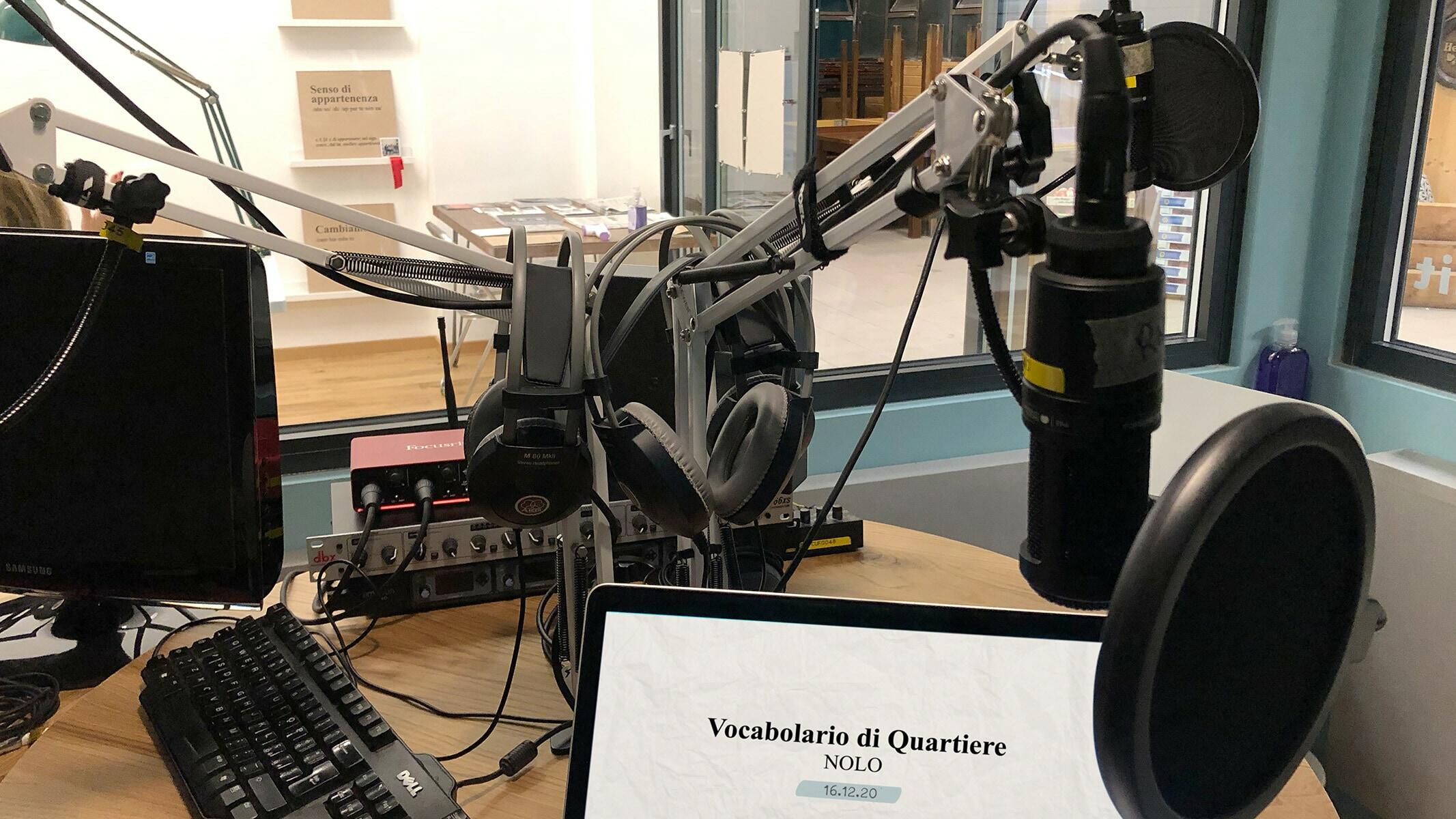 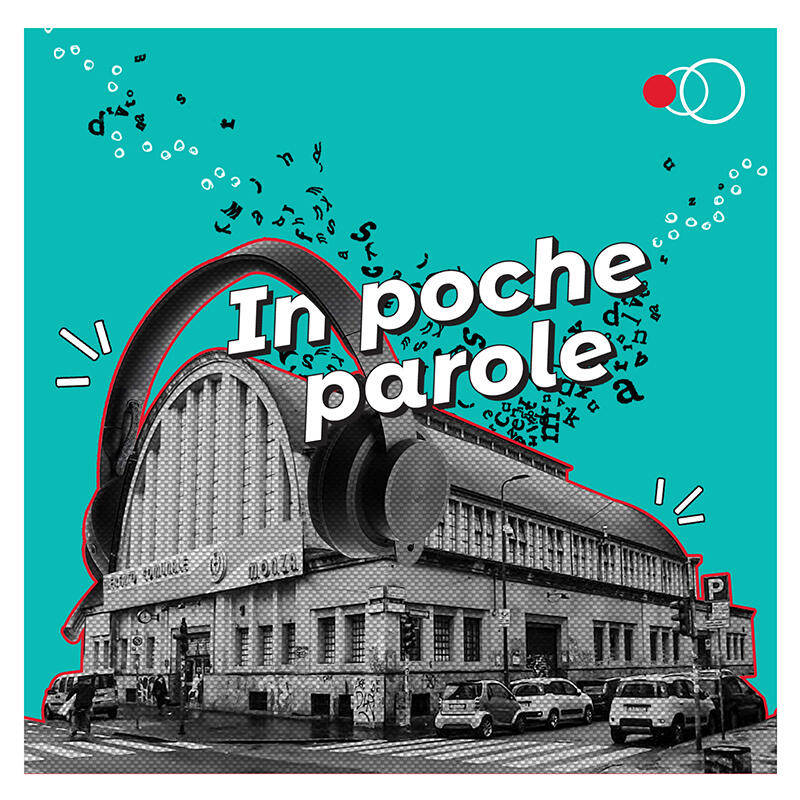 version #3 - February 2021
Graphic prototype of the first vocabulary addressing one specific word, i.e. public space. This thematic vocabulary has been used as a basis for making the first Podcast of Radio NoLo (“in Poche Parole”), also addressing the word “public space”.

The project Vocabolario di quartiere (neighbourhood vocabulary) is framed within an ongoing experimentation of Politecnico di Milanoin the city of Milan, in an urban lab entitled “Off Campus Nolo” (http://www.polisocial.polimi.it/it/off-campus/) coordinated by the Polimi Desis Lab based in the local covered market of the Nolo neighbourhood (Milan). This initiative has been taken to make the presence of the University in the city more tangible and provide the university the possibility to be more open and close to the territory and its community. The vocabulary is an ongoing project in which the Polimi Desis Lab researchers (Virginia Tassinari, Davide Fassi, Francesco Vergani, Ambra Borin), and students (Elisa Scrignar e Maria Maramotti) are currently exploring ways to generate conversations around key concepts and keywords considered central to the neighbourhood by its inhabitants. Moreover, the choice of keywords addresses various points of view (human, but also non-human). The idea is that the vocabulary becomes an agonistic space in which to dis-articulate and re-articulate points of view, illuminating unexpected similarities and revealing possible divergences, in order to develop a cultural discourse on the neighbourhood by the neighbourhood. Specific attention is paid to the vocabulary’s potential to include (ontologically) different voices, bringing them in dialogue with one another. It creates the opportunity to identify which common matters of concern might connect them and which new courses of transformative action for the neighbourhood could address them (envisioned and given back to the citizens as seeds for possible future design interventions in the city).

These diverse voices, comprised in the diverse versions of the physical and digital vocabulary are collected through workshops in which the researches use vocabulary toolkit cards and co-design sessions, neighbourhood interventions, individual interviews (online and offline) with inhabitants but also scientists, linguists, philosophers, writers, artists, who help them identify different nuances and points of view on the same word. While the non-human points of view regarding those words is provided by scientists (botanists, zoologists, geologists, microbiologists, etc) the design researchers want to make sure that also more diverse human points of view are addressed, and therefore they pay special attention to marginalized communities. By bringing together all these voices, they intend to identify the radical interdependency connecting the diverse agents inhabiting the contemporary city, redrawing the connection between the environment and the society: on the level of the neighbourhood, particularly focusing on what requires care in the neighbourhood, what should be cared about, and what the citizens should do to really care. As transformations can only happen starting from a deep understanding of one’s own context, the vocabulary works in a situated way, and relating the situated knowledge developed in Nolo to the bigger picture, with other contexts, in order to allow cross-fertilization of insights and ideas and stimulate mutual learning.

The vocabulary - both a digital as well as a physical artefact that has many versions as it grows through time, accordingly to the diverse voices gathered and that can be spread in the neighbourhood in many different forms - is also the protagonist of a podcast In poche parole, a radio program monthly broadcasted from the Radio Nolo recording studio hosted in the Off Campus spaces and developed in collaboration with them (radionolo.it). In it, the vocabulary is enacted, allowing a confrontation between the diverse points of view, articulating a reflection and engaging the citizens to continue the conversation on the social media platforms.

Each month a specific word is chosen as a red thread to provoke new thinking about what could happen in the neighbourhood related to that specific notion. Each month, Off Campus hosts co-design sessions in its space with passers-by and specific focus groups, and showcases the diverse ideas emerging from these encounters, the conversations and the social media activities. In this way, the market becomes a physical agorà, in which conversations can take place, reflections on the words can be shared, and new courses of actions can be designed, prototyped, and start a new life.