Since 2016, Florian Dach and Dimitri Zephir, graduates of the École des Arts Déco de Paris (EnsAD), form the duo dach&zephir. Conceived as a space for free creation, they cross their experiences - in Paris and Guadeloupe - in search of what makes history and identity. History and cultural heritage are approached as a rich raw material for design, capable of generating a language of forms, materials and uses at the origin of artefacts. The duo has built its creative approach on the basis of the Tout-Monde, a concept that is in line with the thinking of the Martinique philosopher Edouard Glissant, according to whom our current world must be told according to the principles of interpenetration of cultures, in a true dynamic of exchange.Their work has been exhibited at the Carpenters Workshop Gallery in London, at the Salon Satellite in Milan, at the Dutch Design Week in Eindhoven, at the Reciprocity Design Biennial in Liège, at the Operae Design Festival in Turin, at the Mémorial ACTe in Guadeloupe and at the Shenzhen Museum of Contemporary Art in China.

Élòj Kréyòl is a design research that retraces the forgotten stories, minorities in the genealogy of the Antilles archipelago. It proposes to tell the cultural stories through the practices, techniques, gestures and rituals of life that characterise creole identity. Through the study of an emblematic kitchen knife of the French West Indies, the « couteau CHIEN », this part of the research proposes to shed light on the Actions of creolisation at work in the French West Indies. The different forms of reinvention of the « couteau CHIEN » knife tell the story of the natural Creole agentivity in the face of the standardisation of this utensil. Its potential taxonomy in the Antilles proposes a new historical and creative chapter in the history of design: the « creole design ». This approach will allow to think about a design of the intersection of cultures, imaginaries and creativities, a new chapter in design history where the notions of resistance, resilience and decolonisation enter into conversation.

Activation of the Potential Taxonomy of the Knife « Couteau Chien » at Villette Makerz
with the action Creolised stories of a kitchen knife.

Dach&zephir will share with the public their latest research-Action around the « Couteau Chien » as part of their research project Élòj Kréyòl which retraces the forgotten, minorized histories in the genealogy of the West Indies. In the form of a conference-performance using some objects on display at Folie N°6, they will first present the process and the issues involved in their research. They will make visible the way in which objects, a priori anecdotal, are reinvested by creative tactics specific to the traditions of Creole communities. These are what Glissant calls "phenomena of creolisation". Through a workshop-collage around the « Couteau Chien », participants will be able to grasp these processes at work and thus extend their imagination. 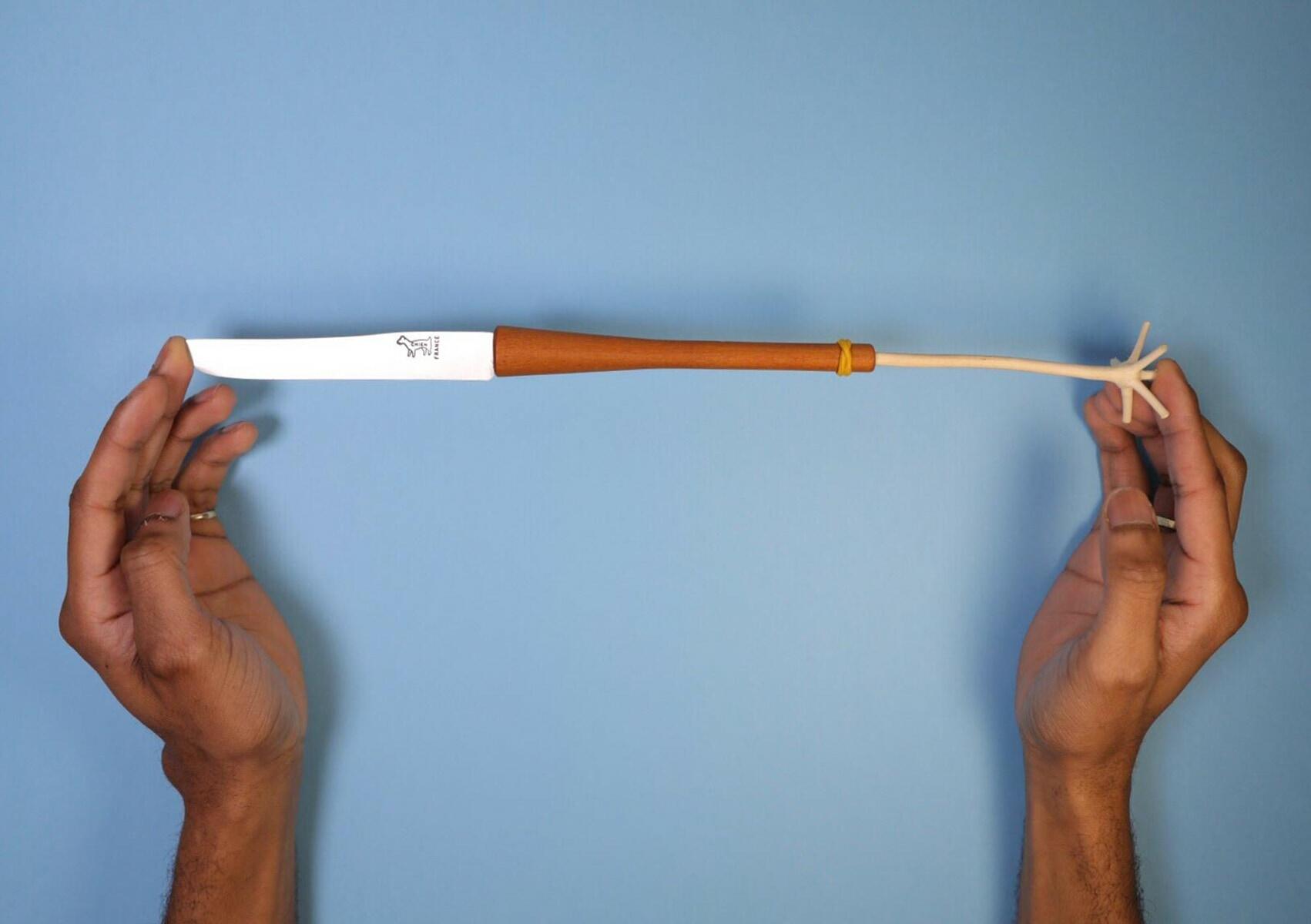 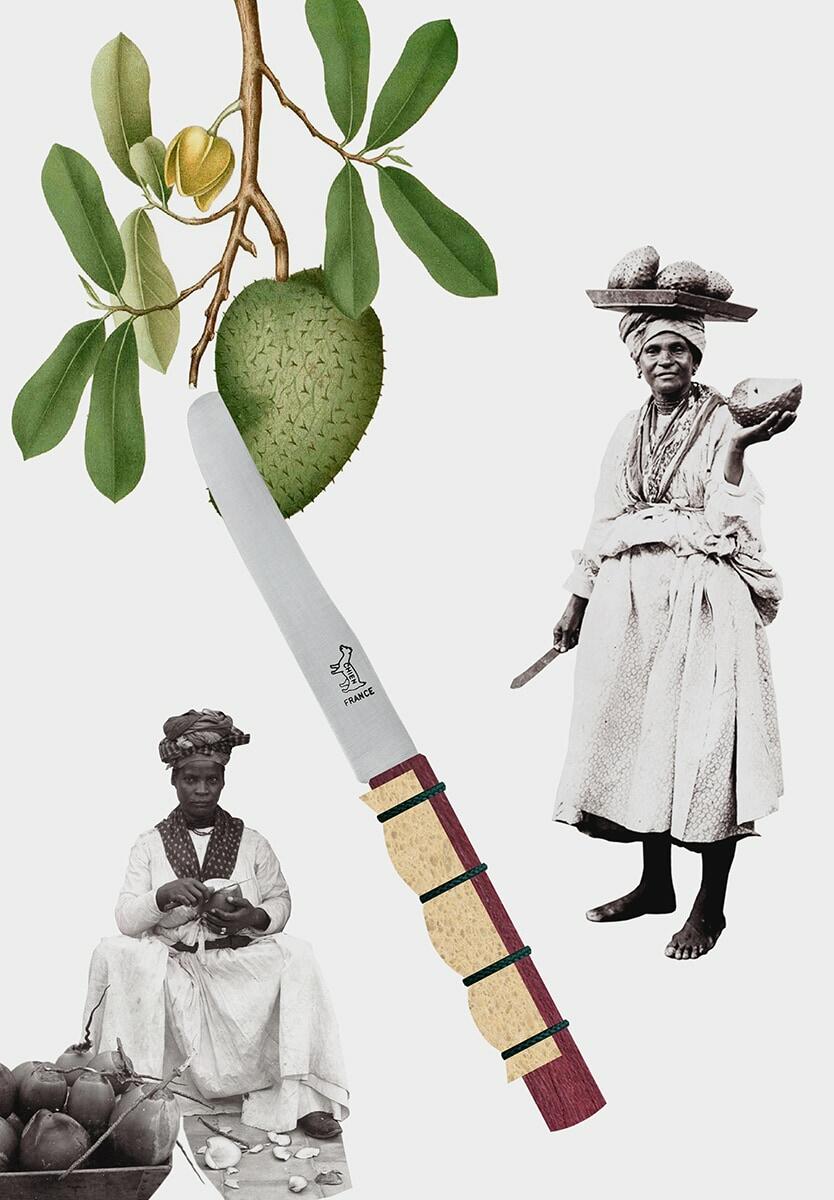 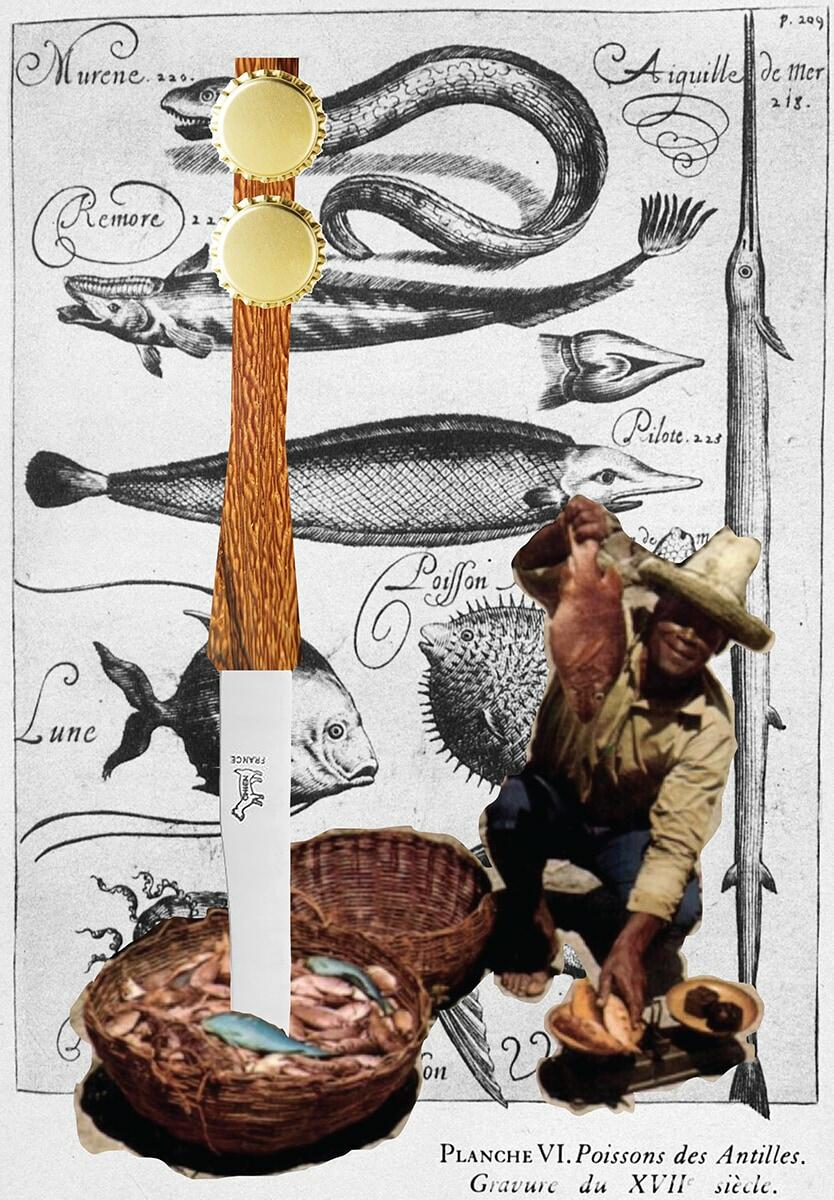 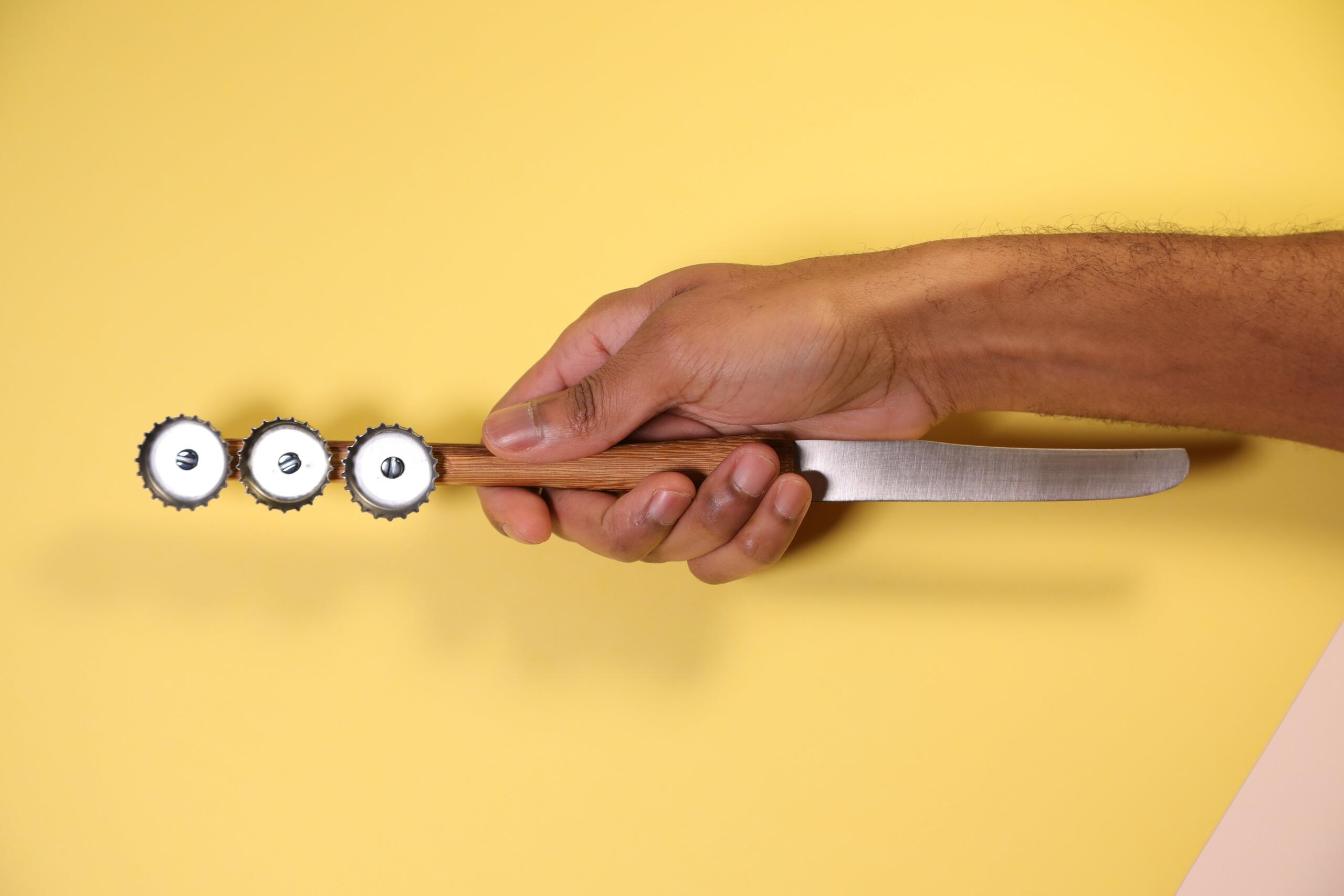 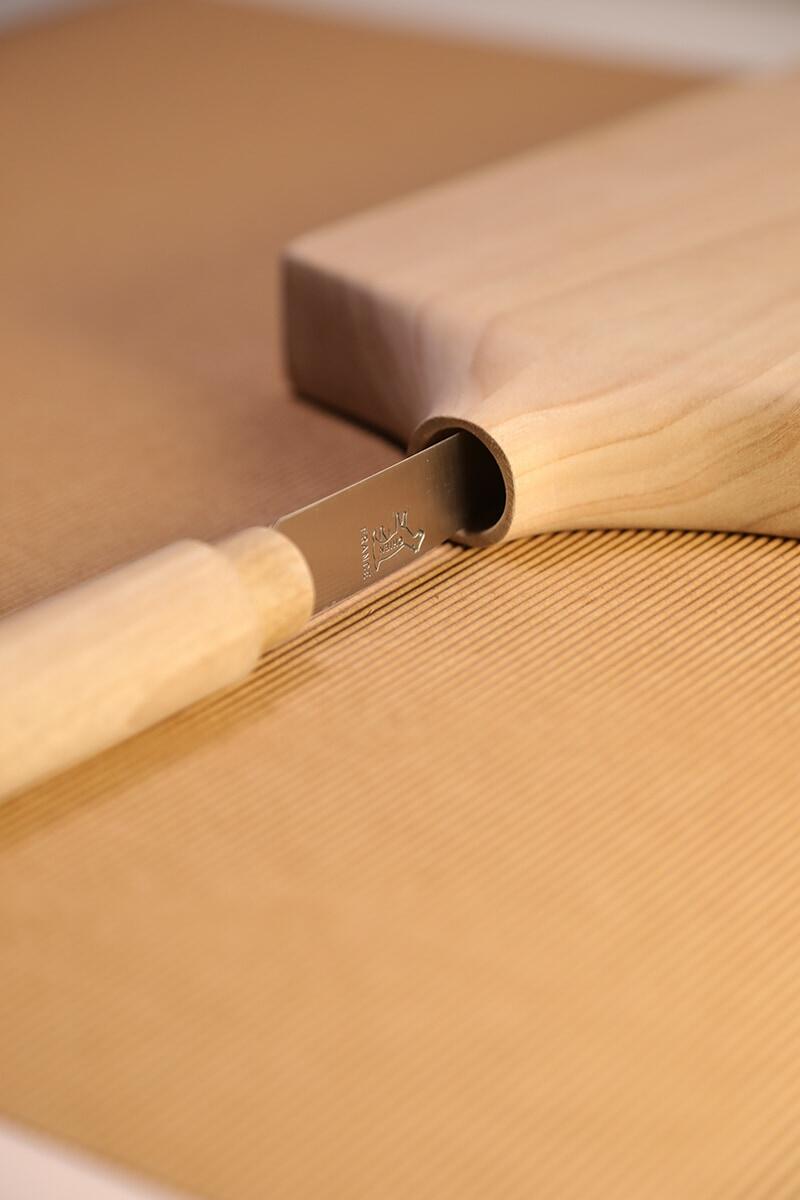 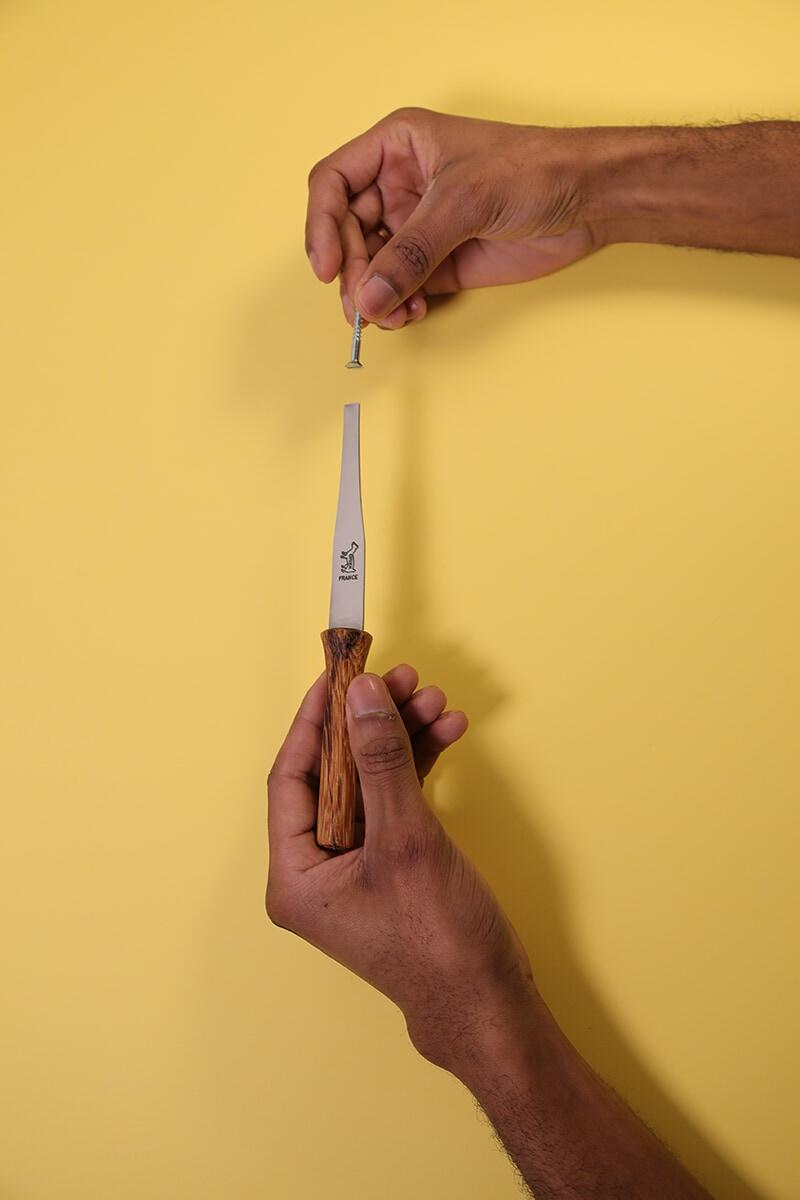 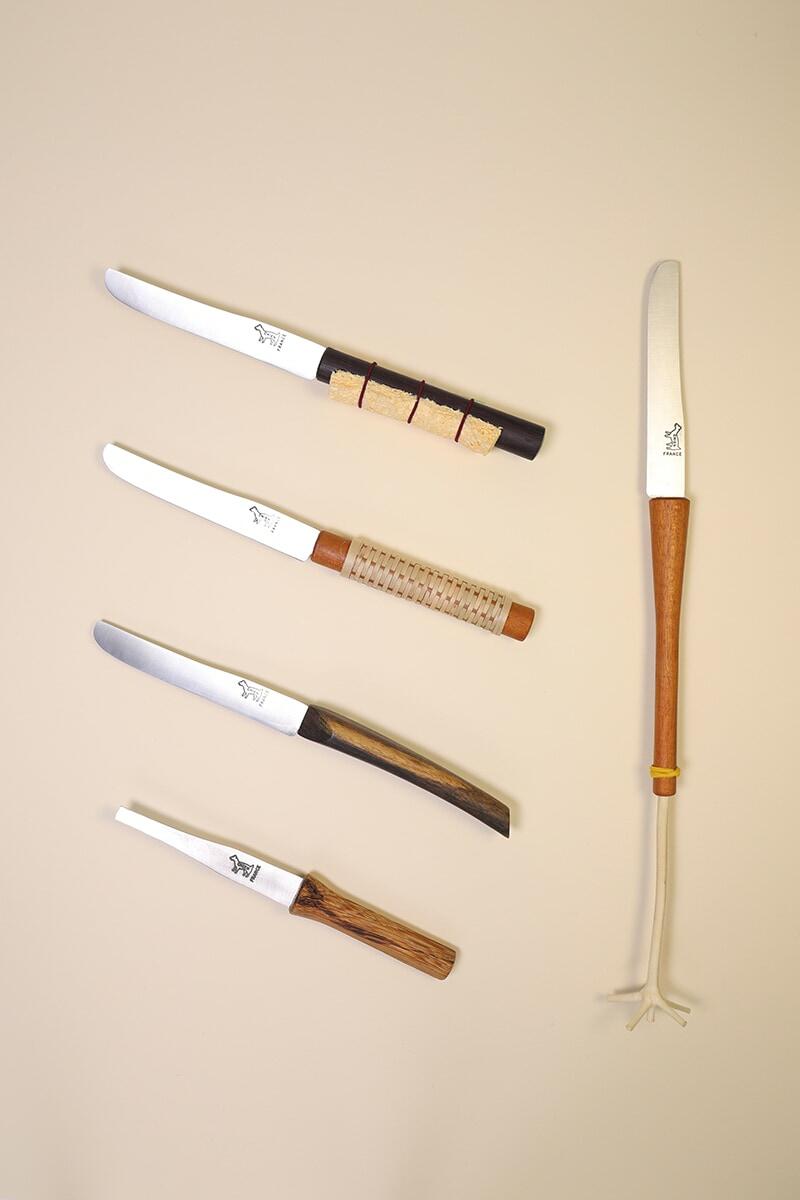 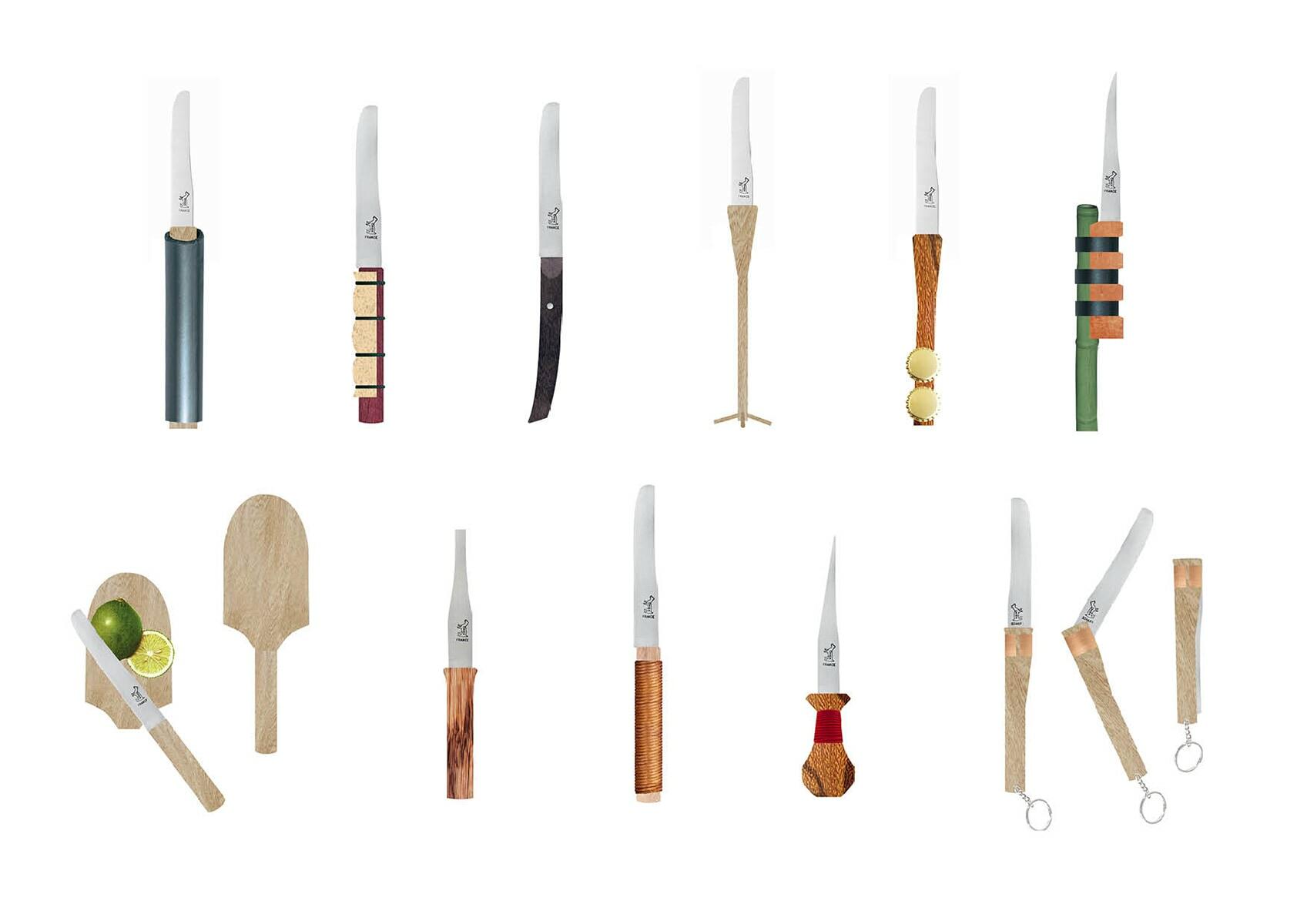 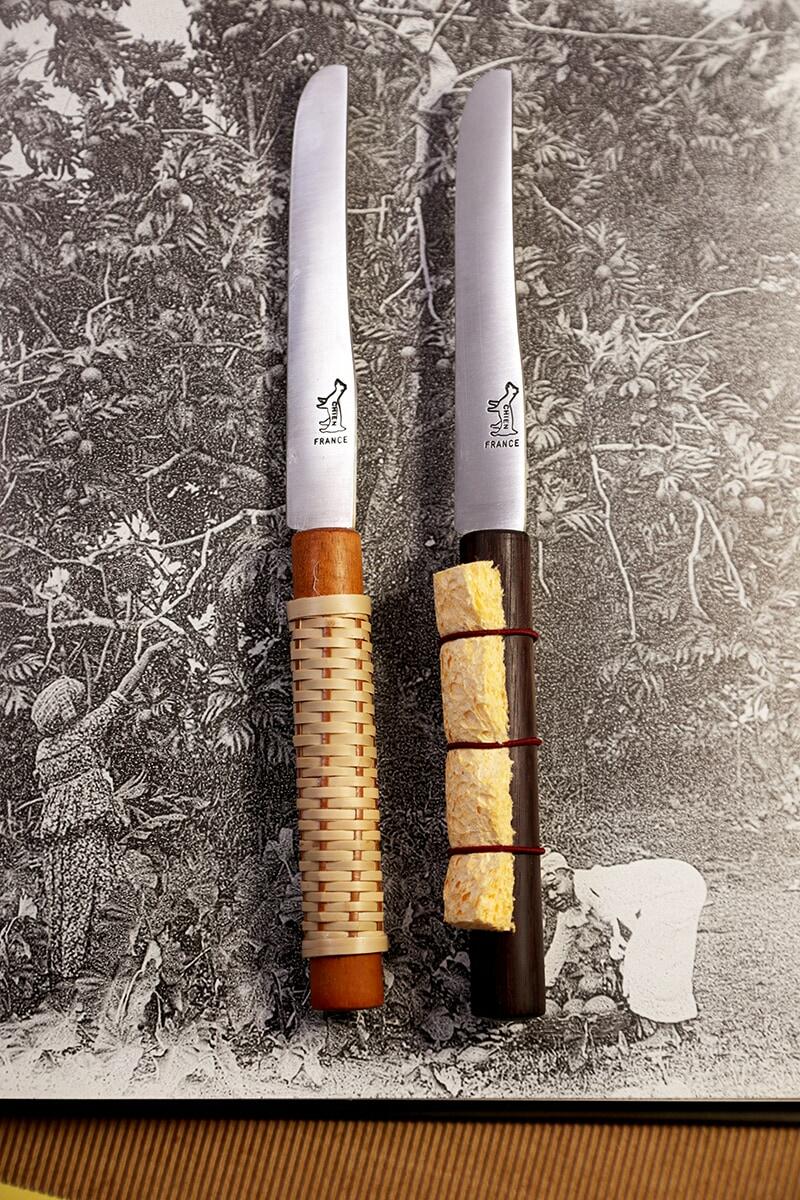 The potential taxonomy of the Couteau CHIEN is a research and speculative project, part of the Eloj Kréyol field design research led by studio dach&zephir since 2015-16, in which the duo explores the minored and lost histories of the French West Indies (Guadeloupe and Martinica). Though polyform and polysemous contributions (product design, visual essays, articles and education programs), Eloj Kréyol proposes to re-embrace the diversity and plurality of historical and cultural aspects of creole cultures in the Caribbean, by celebrating/inauguring the creolization (of the design). A concept popularized by the Martinican poet and philosopher Edouard Glissant, though which the duo build his creative way of thinking design.

During the second chapter of the Eloj kréyol research in Martinica in 2018, dach&zephir discovered the particular history of the couteau CHIEN [trans. DOG knife] thank to M. Esson, an old bamboo broom craft that was invited to share his know how during one the education program he did with the primary school of the Vauclin, Martinique.

Produced in Thiers (center of France) for generations, the legend said that of this knife – punched with a dog logo on the blade – appeared in the West Indies as a wedding gift for a cooker. Later, it will be used to prepare a very popular sauce called the “sauce chien” [trans dog sauce], a sauce made from sliced onions and tomatoes, which embellish local dishes. Today, the “couteau CHIEN”, whose production is sold almost exclusively in the French West Indies, composes the necessary of the French Carribbean cooker.

The celebrity of the “couteau CHIEN” has always been based on its potential for rich uses until exhaustion of the blade.
"[...] And when the handle would finally give way in long periods of work that he had been doing for many years, father or grandfather would bring this knife back to life, by putting at the handle, which he wrapped with a piece of wood and rubber - from car or bicycle - and often also from wires they pulled from electric cables to hold the handle. […] The knife was inexhaustible. Even when it became more than a small thin blade, people used it, as we said, to “break the ice”, or to slaughter the animals, or it was used as a screwdriver. The dog knife was a tool used by the whole of the family and for all occasions. It’s important, important! »1

This adaptation of the “couteau CHIEN” illustrates the natural agility of the Creole communities, that we can be compared to the contra-industrial forms that exist in Cuba (Ernesto Oroza, Rimikibili, 2009). For dach&zephir, those creative forms of re-appropriation are the essence of a design process specific to the island and his history, and this “redesign” of the couteau CHIEN participate of their idea of a “creolization design”.

The potential taxonomy of the Couteau CHIEN shows an unknown history lost by the introduction of a more durable plastic handle that erased the tradition of customizing the knife. This history was co-written between Thiers and the French West Indies; between an industrial production that reinvents itself through manual know-how, specific to Creole cultures.

This ongoing collection presents different typologies of knifes, corresponding to the multiples uses that exists in the context of the island, by re-shaping its handle (and for some proposals, modifying the blade). Every handle has been re-created regarding daily scenes or uses that the duo watched or heard about, thanks to local materials and technics.

Following on from these reinventions, and based on a series of discussions with locals, the collection proposes to revive this tradition and imagine the future use of the couteau CHIEN, by creating new forms, new hybrids, new imaginary. Another way to think creative process. An ode of creolization.