Vehicles for the community

Lungomare, cultural association
Angelika Burtscher and Daniele Lupo are the founders and co-curators of the project space Lungomare and of the design and visual communication studio Lupo Burtscher since 2003. Every year, Lungomare invites artists and designers to Bolzano, South Tyrol to engage with the territory and its history, landscape, society and culture with the aim of developing tangible Actions and testing the possible relationships between design, architecture, urban planning, art and theory. The duo also co-founded COSMO in 2015, a collaborative platform for designers, local artisans and craftspeople who have fled their home countries.

Orizzontale is an architects’ collective based in Rome whose work crosses the fields of architecture, urbanism, public art, and DIY practice. Orizzontale has been promoting projects of common relational spaces, giving form to both dismissed and unseen images of the city. These projects have represented the ground for experimenting new kinds of collaborative interactions between city dwellers and urban commons as well as occasions to test the boundaries of the architectural creation process. Their mobile theatre “8 ½” was awarded the international prize of Young Architects Program (“YAP MAXXI 2014”) by MAXXI Museum and MoMA PS1. In 2018 at the Venice Biennale, orizzontale is awarded the “Young Talent of Italian Architecture 2018”

The project of Co-Carts - vehicles for the community was created as part of the 2020 artist in residency of Lungomare with the collective of architects orizzontale. Co-Carts are pop-up devices, built to be manipulated and transformed, to enter into synergy with each other and with their context and to amplify the relationship between the inhabitants and the city. Through them, the public space becomes a space of negotiation where, instead of social demarcation, human interaction can take place and needs and ideas can be shared. Co-Carts encourage freedom of opinion, are multilingual and intercultural. They have the potential to transform urban space, to give an echo chamber to unheard voices and a space for collaborative action. Co-Carts are eccentric, open, and anti-racist. They do not produce personal profit. They support inclusiveness, deconstructing existing categories, not only creating a space but celebrating it. Co-Carts promote freedom of opinion, are multilingual, cross-cultural, and trigger discussion, debate, reactions. During the ExpoAction the Co-carts will be in Action in the squares and streets of Bolzano, if the sanitary situation allows it. 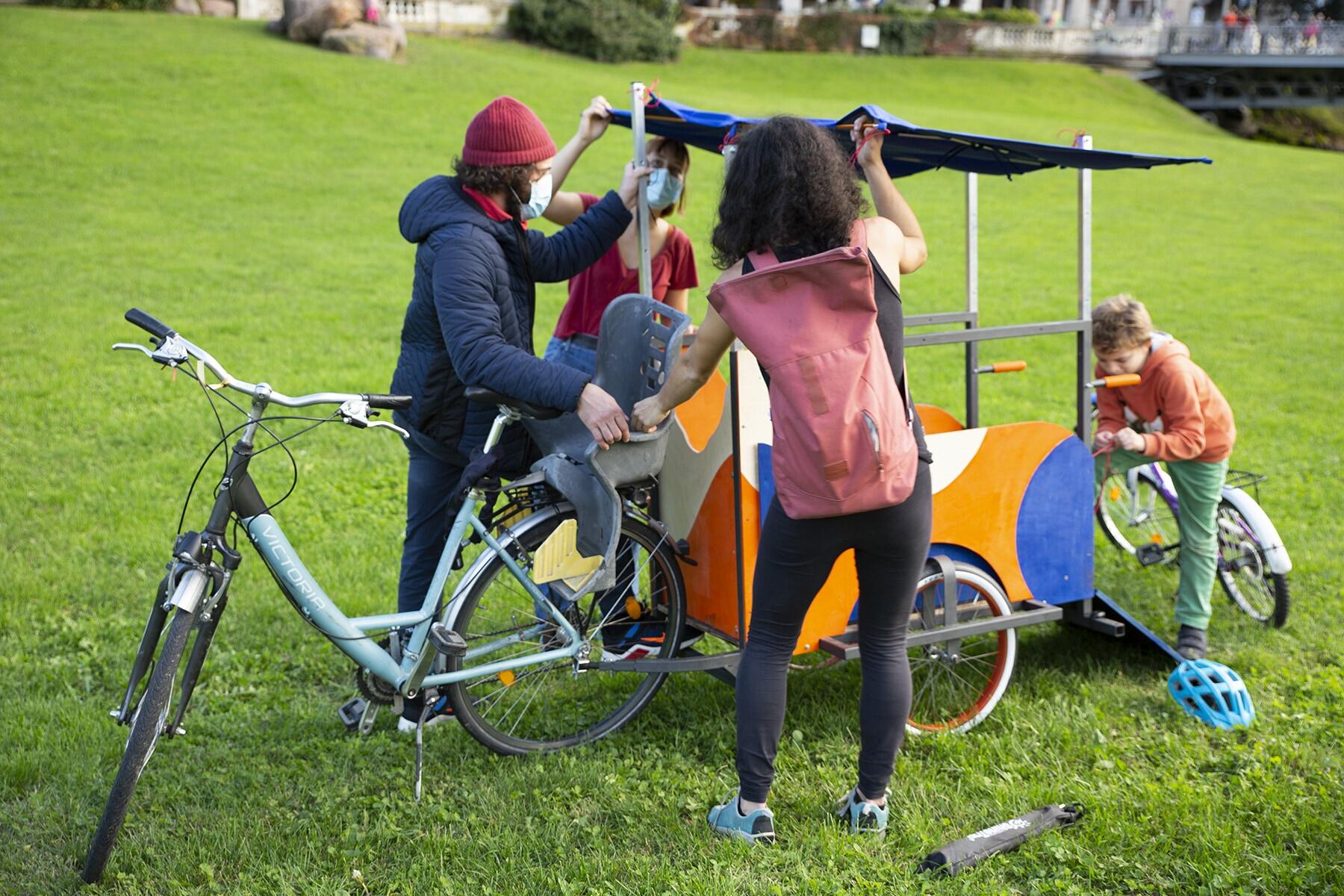 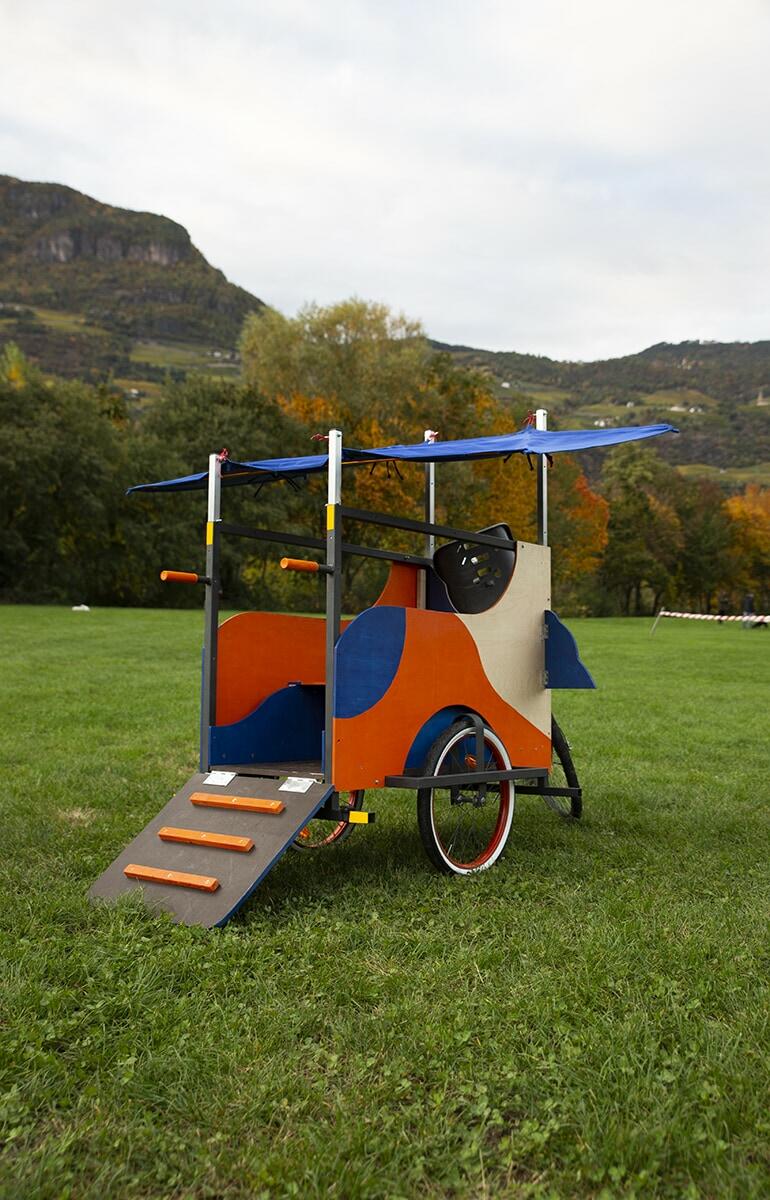 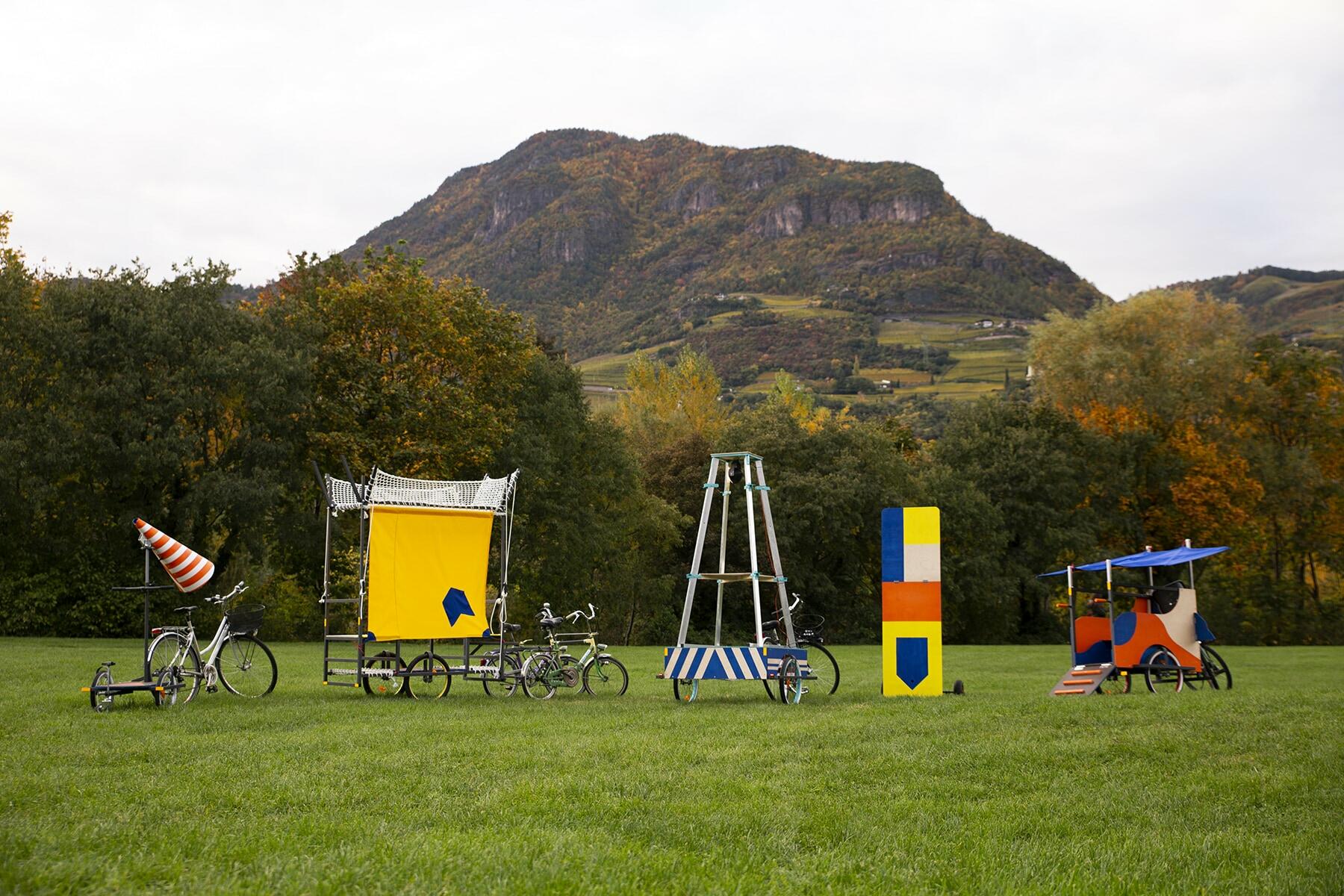 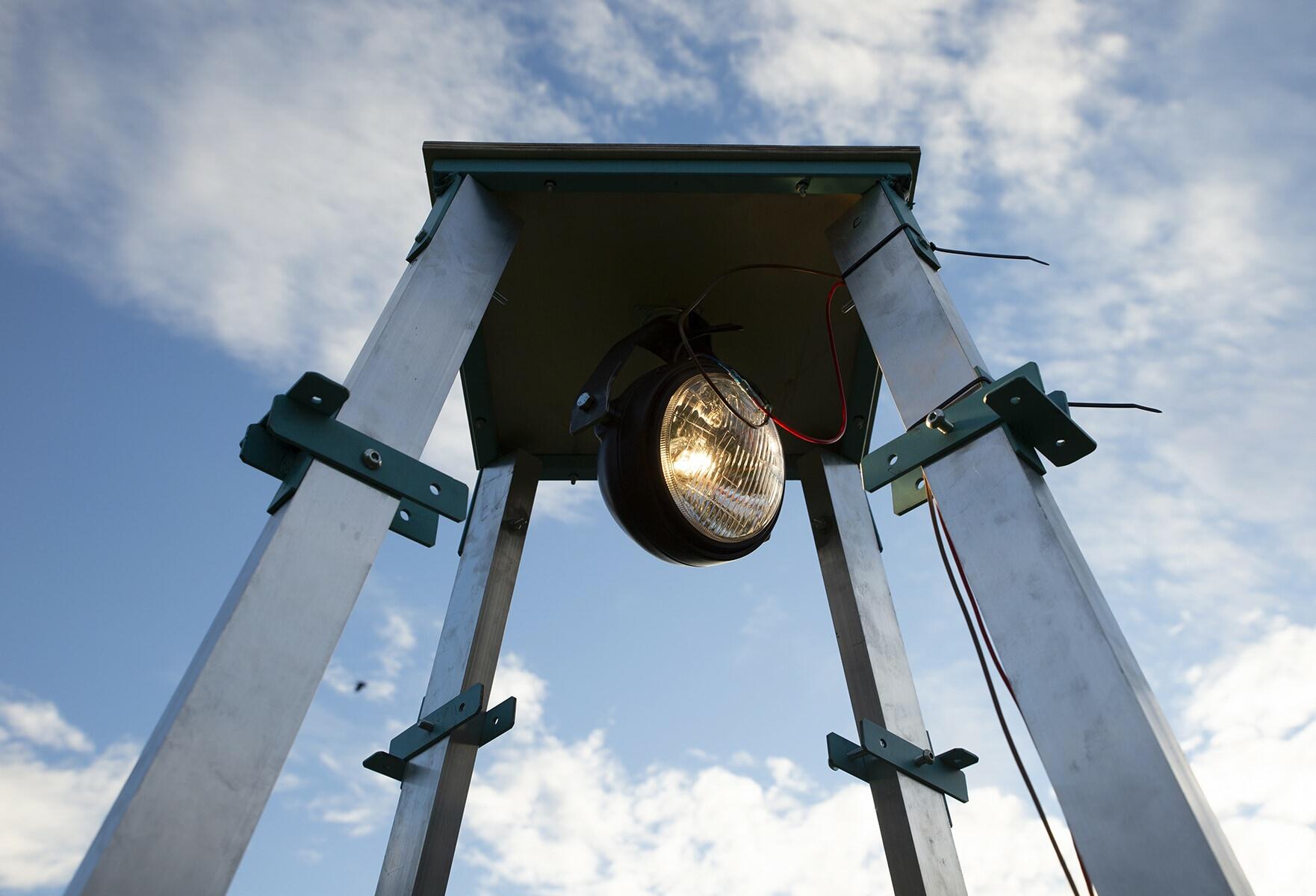 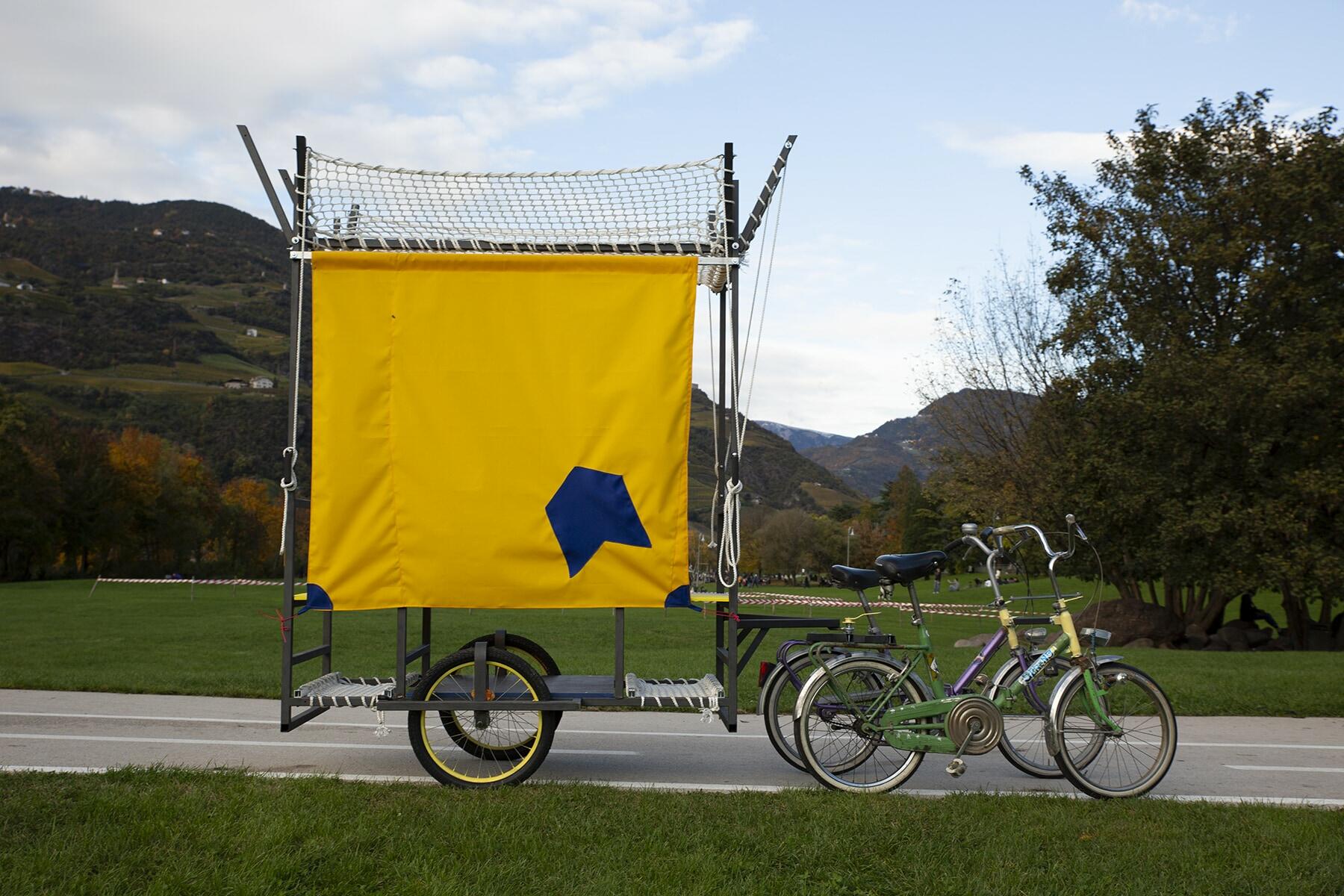 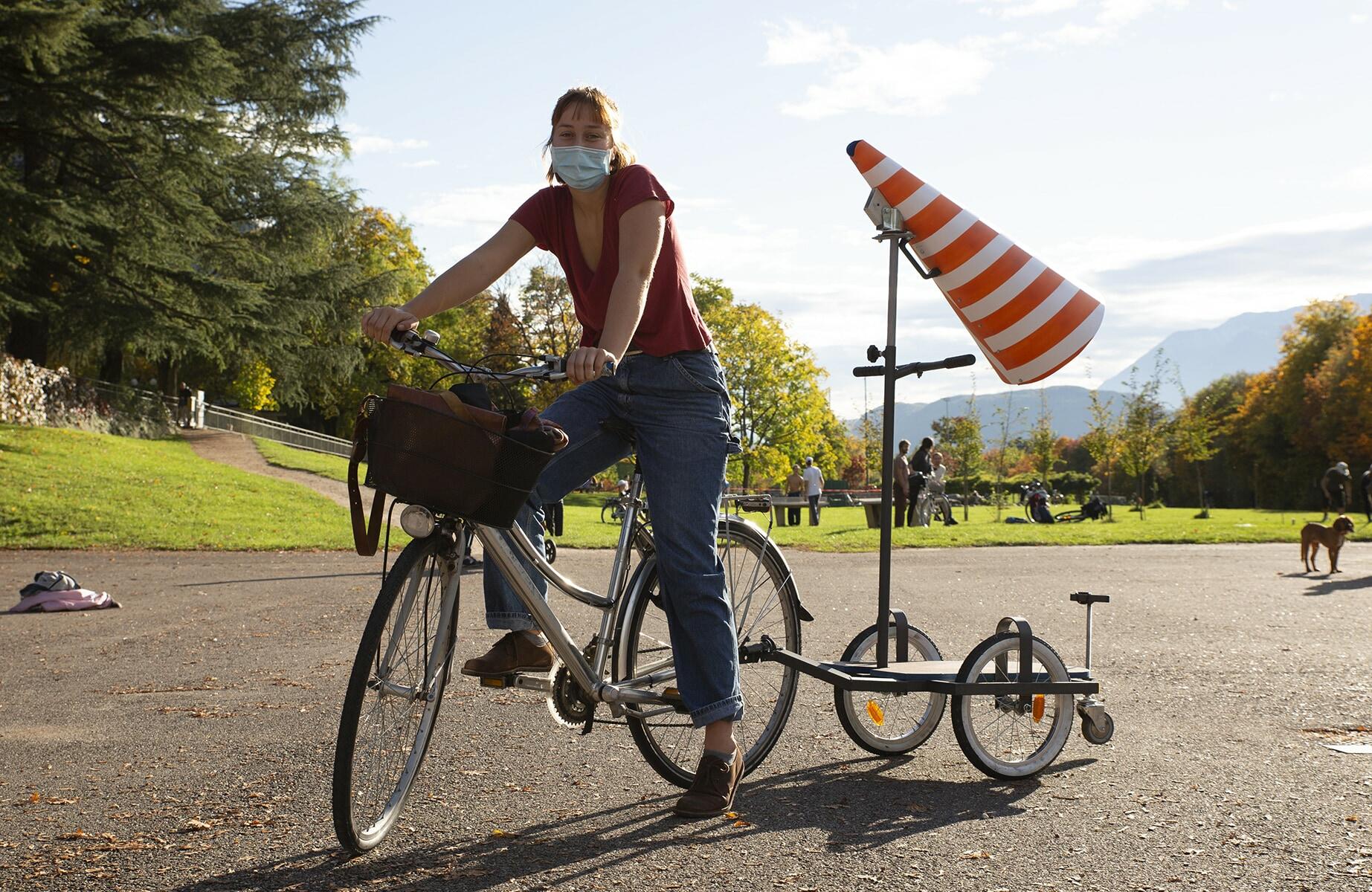 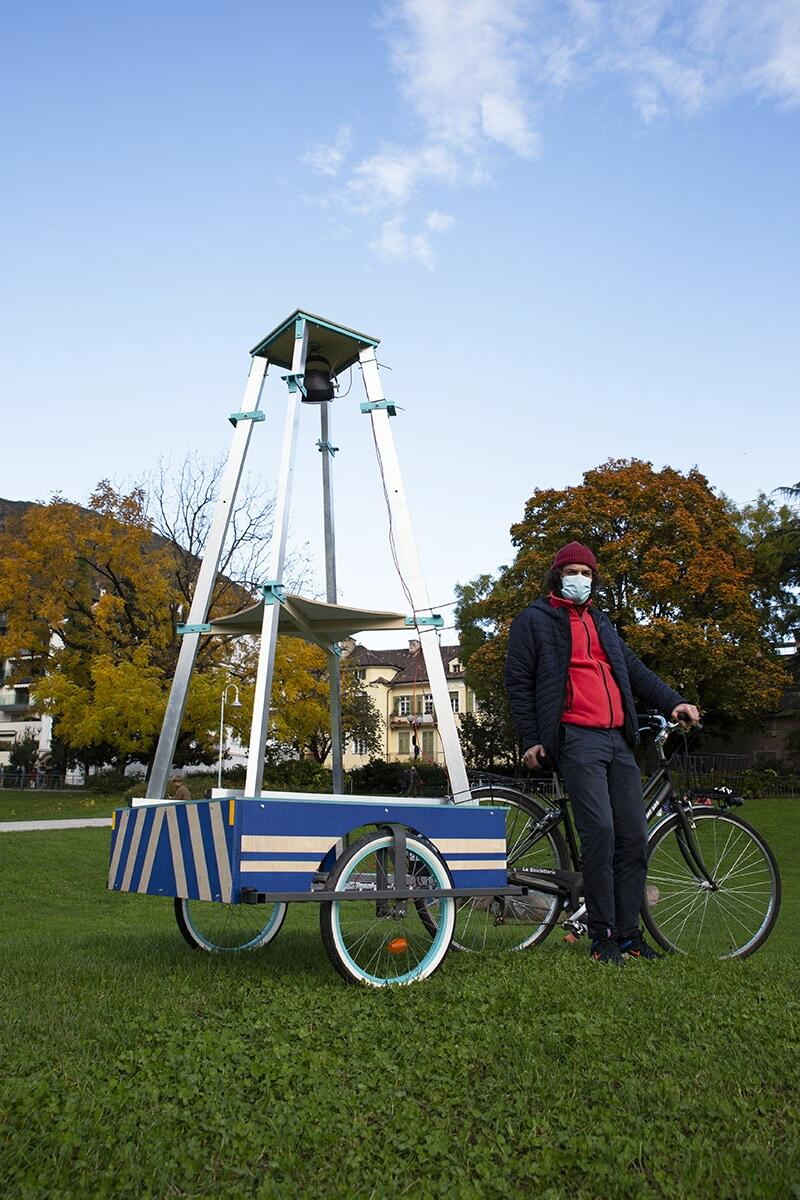 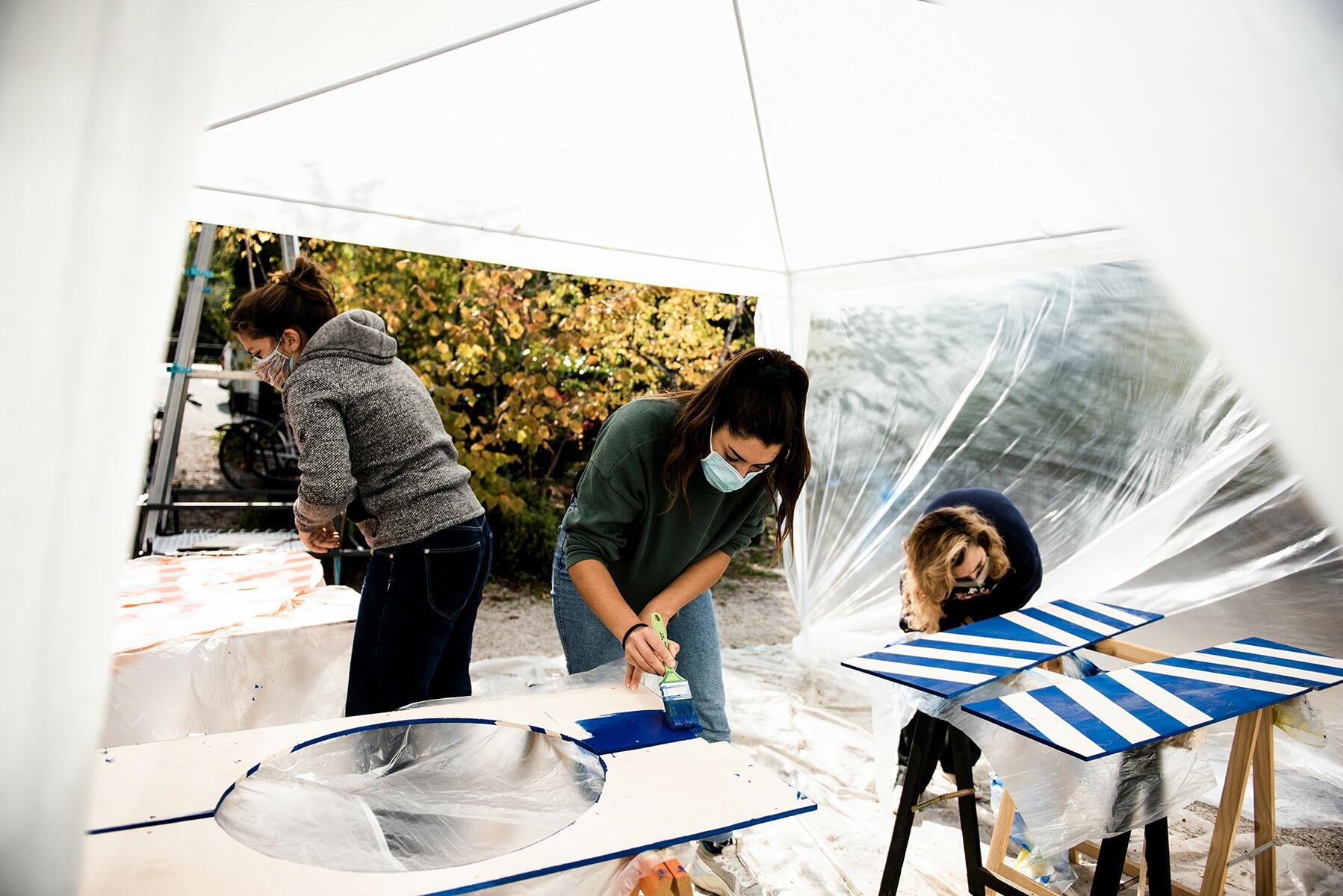 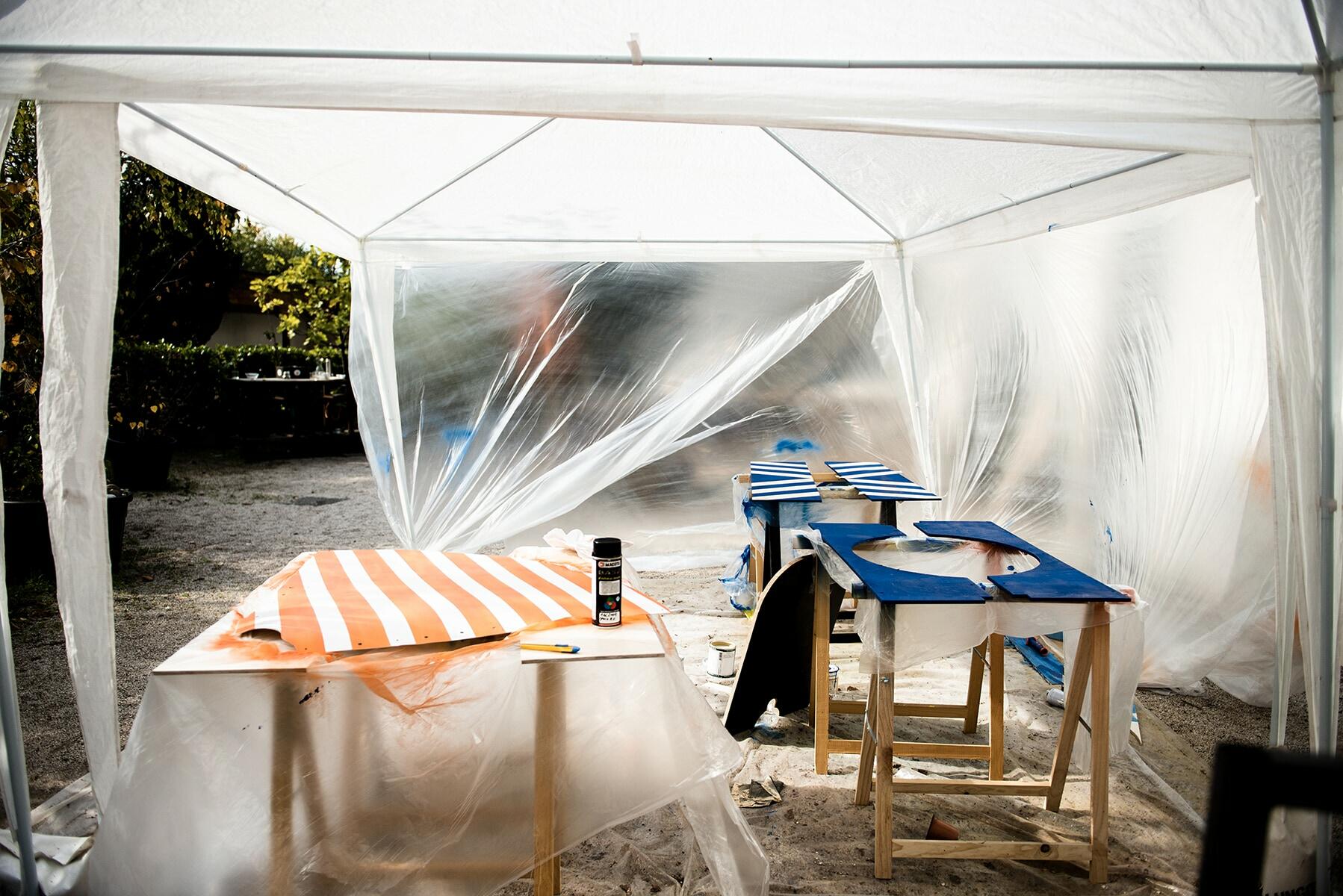 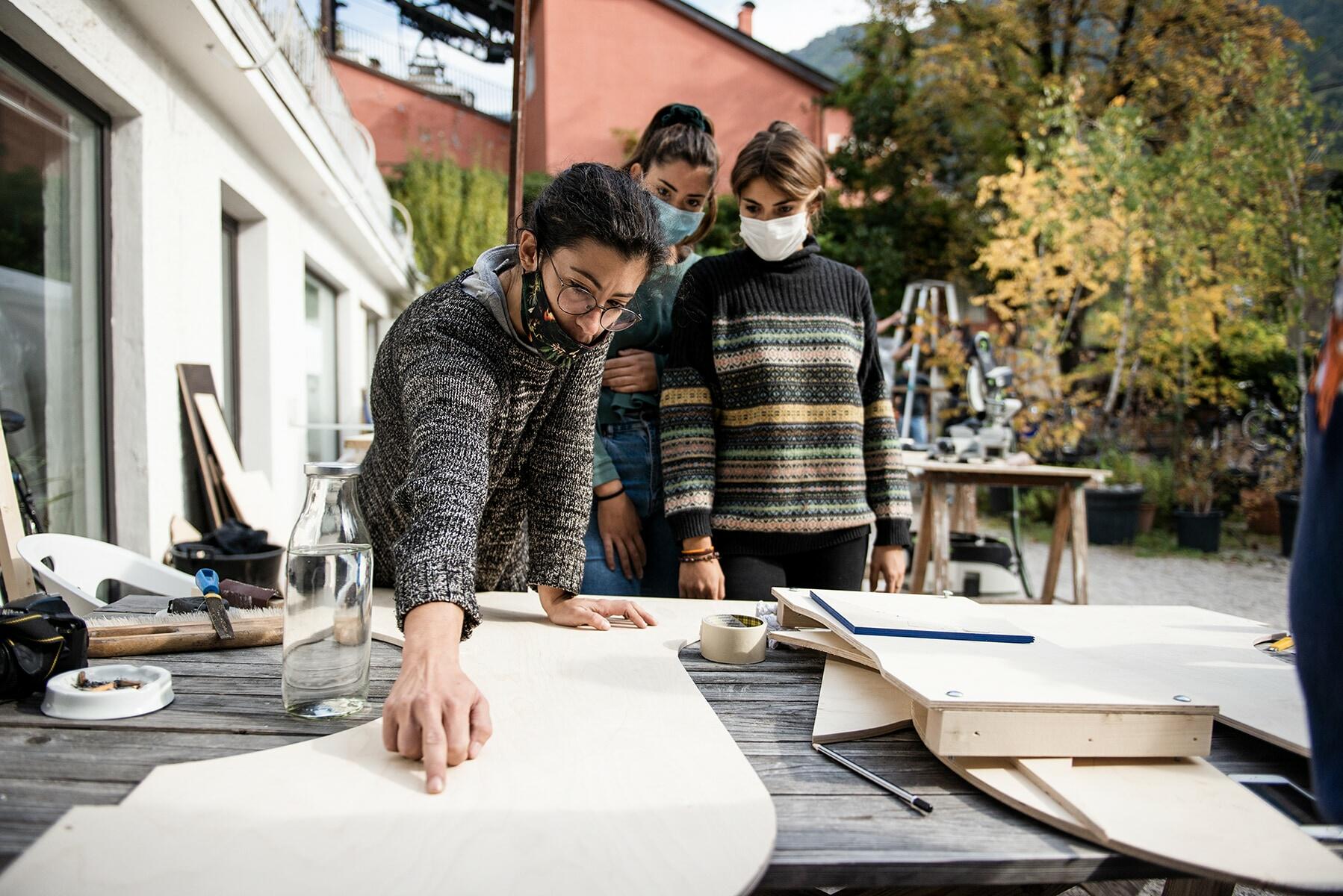 An strange convoy winds around the city : It crosses neighborhoods, from the historic center to the large public housing complexes, crosses the courtyards bordered by vegetable gardens and dotted with public spaces that are now empty due to an excess of prohibitions; it reaches the river, runs alongside it, descends along sports fields and climbs the side of the mountain. Suddenly this astonishing procession dissolves, the vehicles scatter, taking unprecedented paths in the urban territory. Finally, they reunite. They choose small openings or large voids in which to stop. They take up space, make themselves comfortable, stretch their limbs, spread their wings like birds ready to take off, pull unexpected objects out of their bellies. And then they come close to each other, giving shape to new imaginings. Little by little, a collection of eccentric, polymorphic vehicles is revealed, the Co-Carts. Transitory, expansive, disruptive. Loud and subversive. Low-tech devices and multifunctional tools, in contrast to the specificity and individualism of the automobile. Each has its own shape and use that distinguishes it, but it is in their ensemble that they best express their potential. Singular templates, marching to claim their collectivity. Co-Carts are public spaces on the move, errant alter egos of as many realities, that work daily in the city and for the city, constructing connections, opening spaces for expression, and giving voice to diversity. They desire new alliances, proposing free management and sharing systems. They are pop-up devices, built to be manipulated and transformed, to enter into synergy with each other and with their context and to amplify the relationship between the inhabitants and the city. They collect submerged resources, activate dormant synapses of a collective intelligence ready to emerge. They look for alternatives, suggest possibilities, and invite us to imagine new social pacts and unusual ways of living in the city. 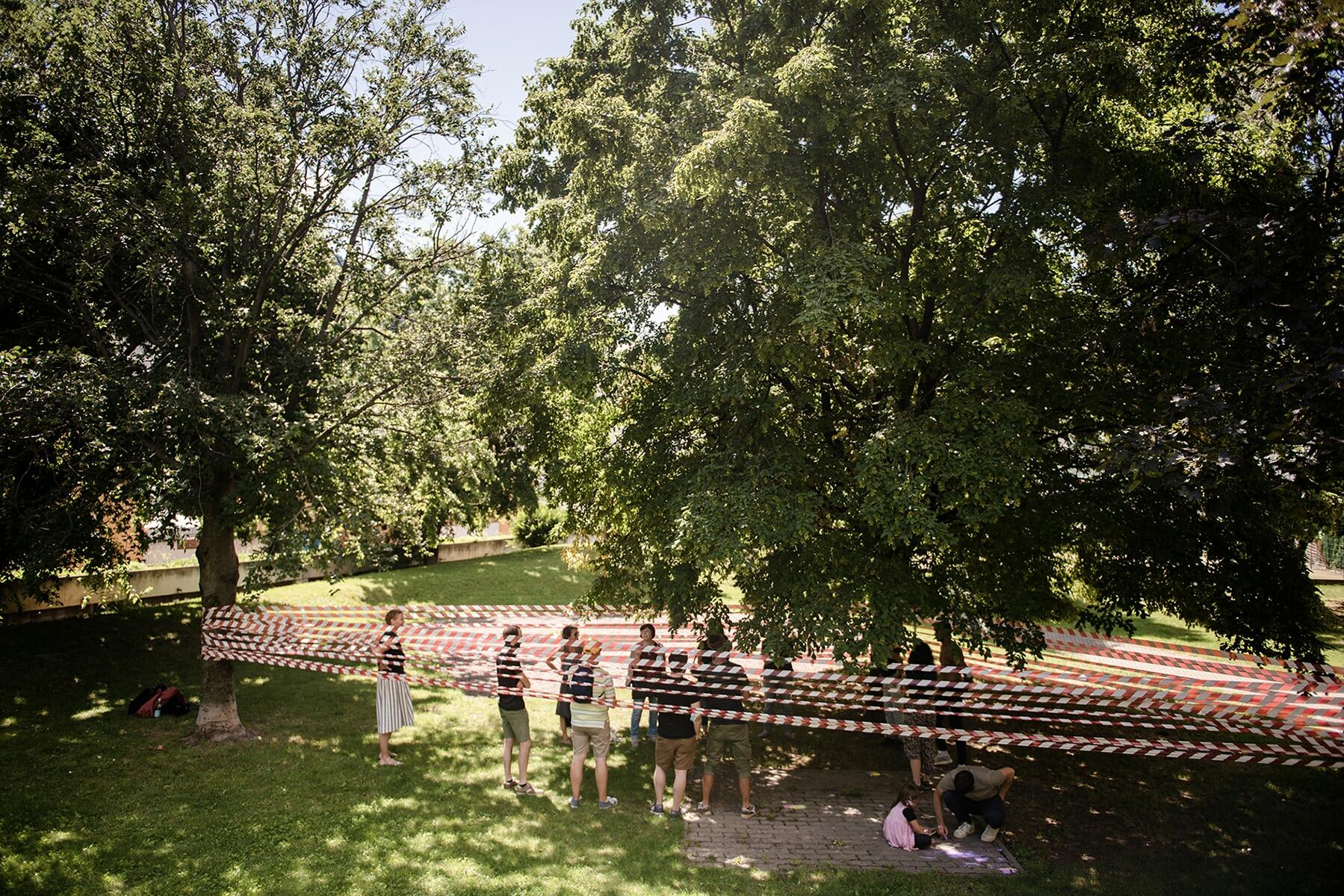 As a first approach to get out of our captive state, we gave shape to a delimited environment. With signal tapes a confrontation place was created to reflect on borders as zones of protection and exclusion.  June 2020. A project by orizzontale, courtesy Lungomare. © Claudia Corrent 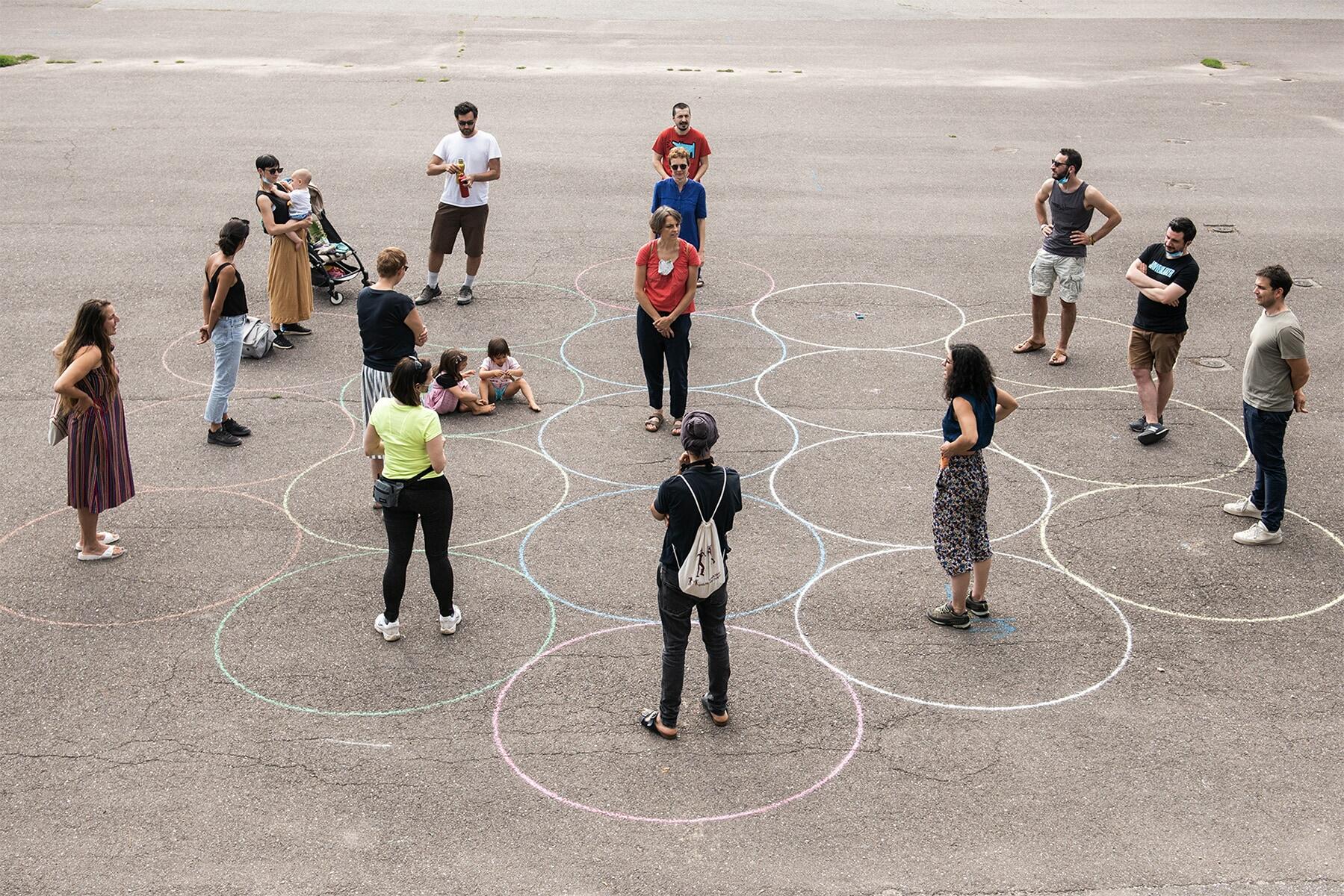 During the second public act we reflected on the relationships that the city of Bolzano promotes and allows. We played with the social distancing rules and using a drawing instrument we measured and visualised the space. How can we interact with each other? In which spaces of the city can we be children?  June 2020. A project by orizzontale, courtesy Lungomare. © Claudia Corrent 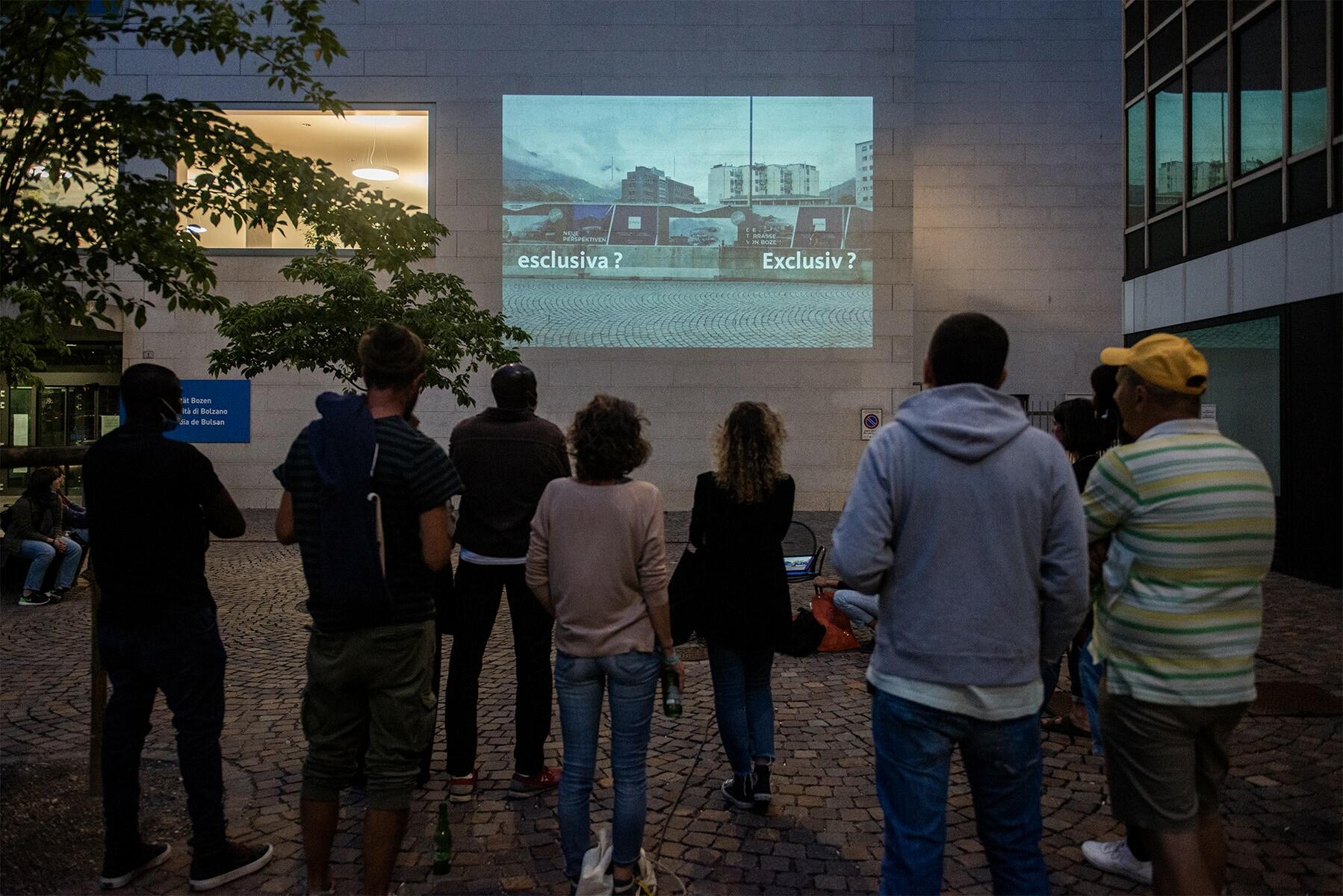 Public Act #3  Domestic and wild space. Is there a balance? 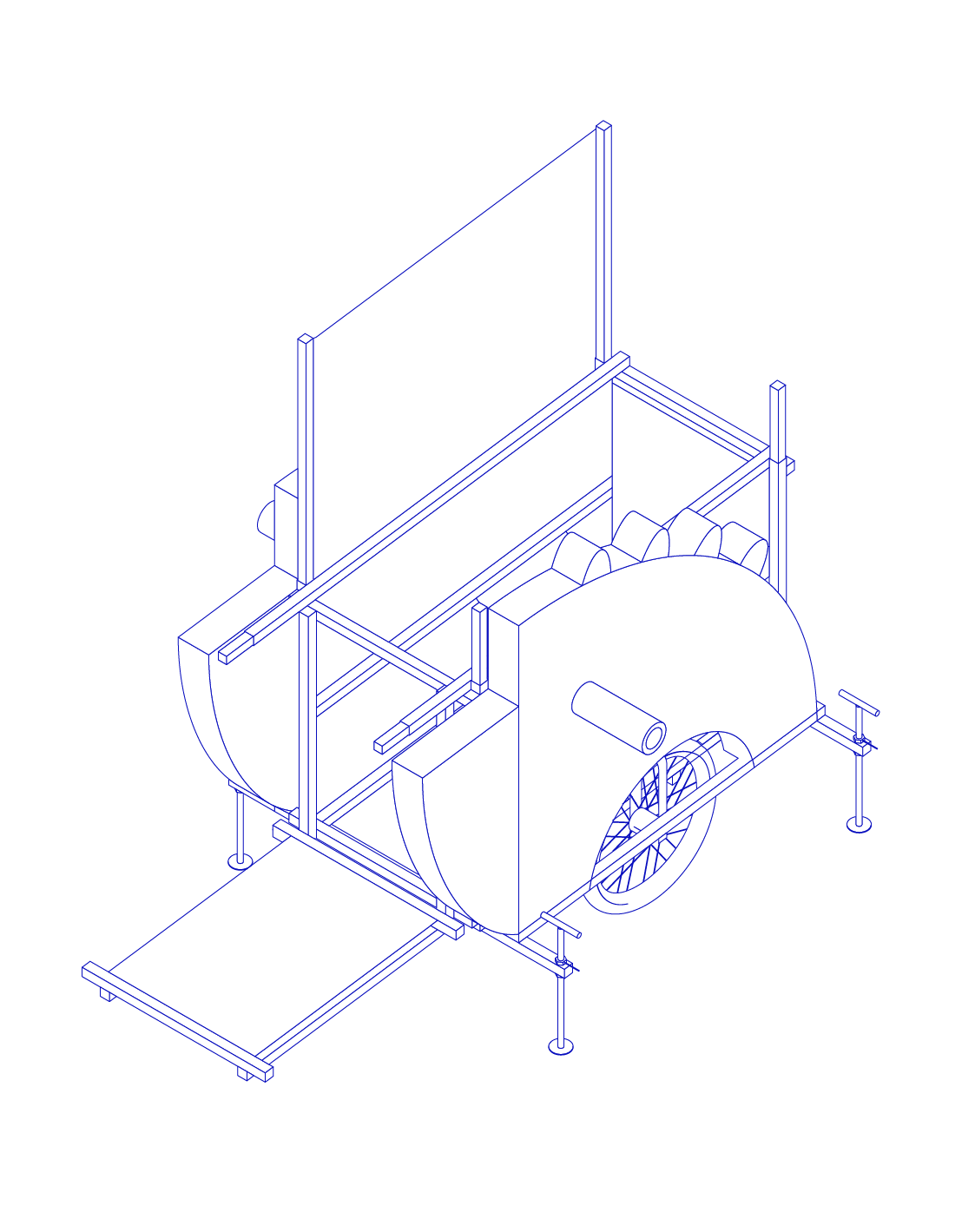 The Acchiappasogni is a large box of games. It can be climbed,
lived in, filled, and dismantled. It travels around the city, and
wherever it decides to stop it just needs to open its flaps to transform
itself into a play area, reclaiming the city as tailor-made
for children. A setting for events and experiments, a place for
performance and spectacle, a moment for listening and telling,
a creative, playful, different space. The Acchiappasogni is a trailer
that can be attached to a bicycle. The external hull resembles an
animal, which opens its mouth and extends its tentacles to occupy
as much of the surrounding space as possible. All sorts of objects
and games come out of the magic box: sheets, carpets, pinwheels,
elastic bands, rulers, windsocks, hula hoops, soap bubbles, chalks, paper and pencils. 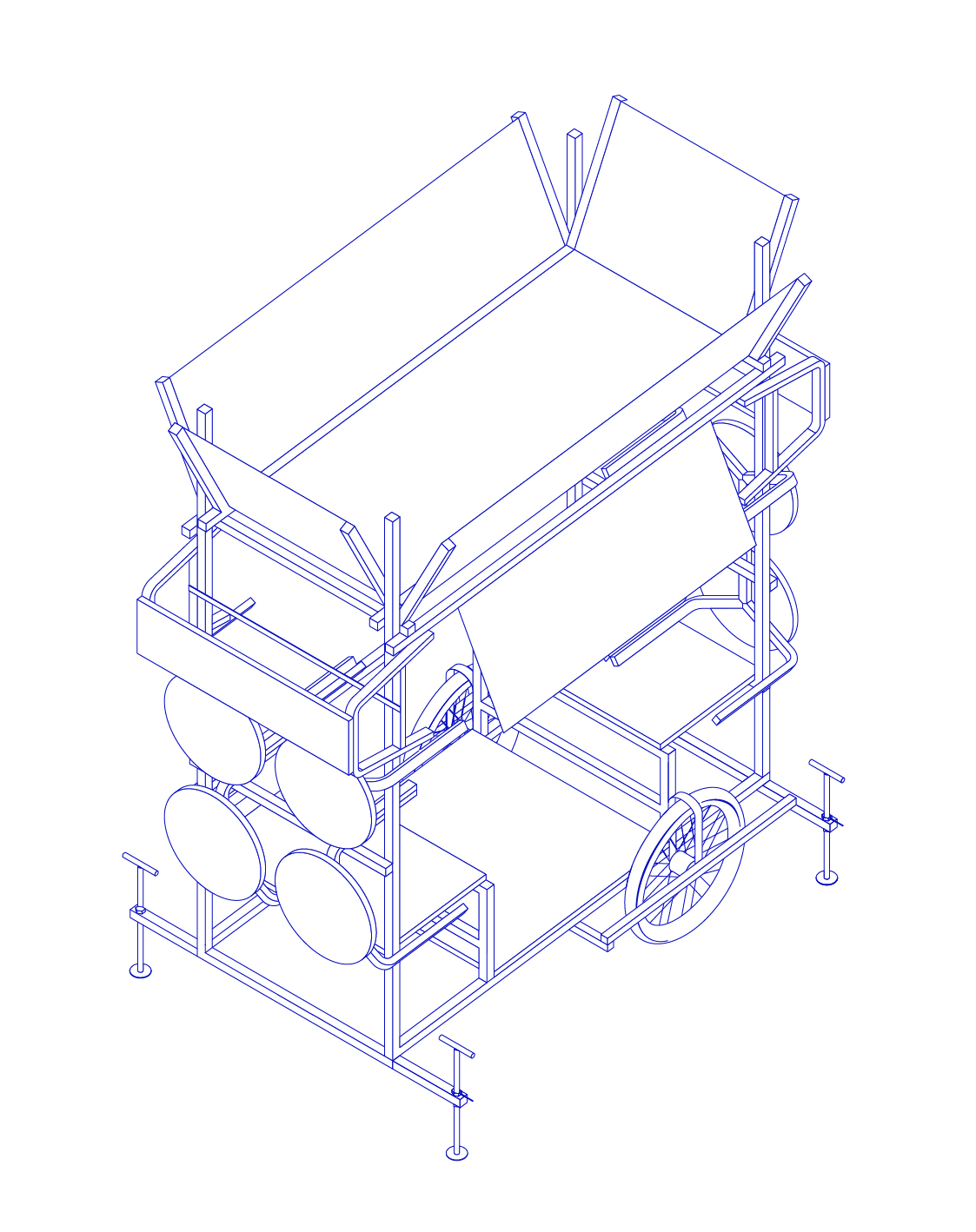 The Attivista mobile is a device that both welcomes and resists.
It walks the street, occupying it, transforming it. It makes noise,
reflects, shields, and signals. Observation point, mobile barricade,
on reaching the crowd it lays down its “weapons” and becomes an
urban living room. Barriers and signs become benches and stools.
The protective net becomes an alcove, sofa, bed. At this point,
appropriating and accommodating turn out to be complementary,
close, overlapping actions. The Attivista mobile is an instrument of
protest and proposal. It looks like scaffolding, useful for multiple
purposes, that can be continuously dismantled or expanded. At
its smallest size it can easily enter an interior space, where it can
become a piece of functional furniture. At its base, it carries useful
objects: signal elements, furniture elements and bollards. Higher
up it houses a suspended rest space, which can accommodate people
or be taken apart and transformed into other furnishings. At
the top, it acts as an antenna for free network sharing and communication,
both physical and virtual. 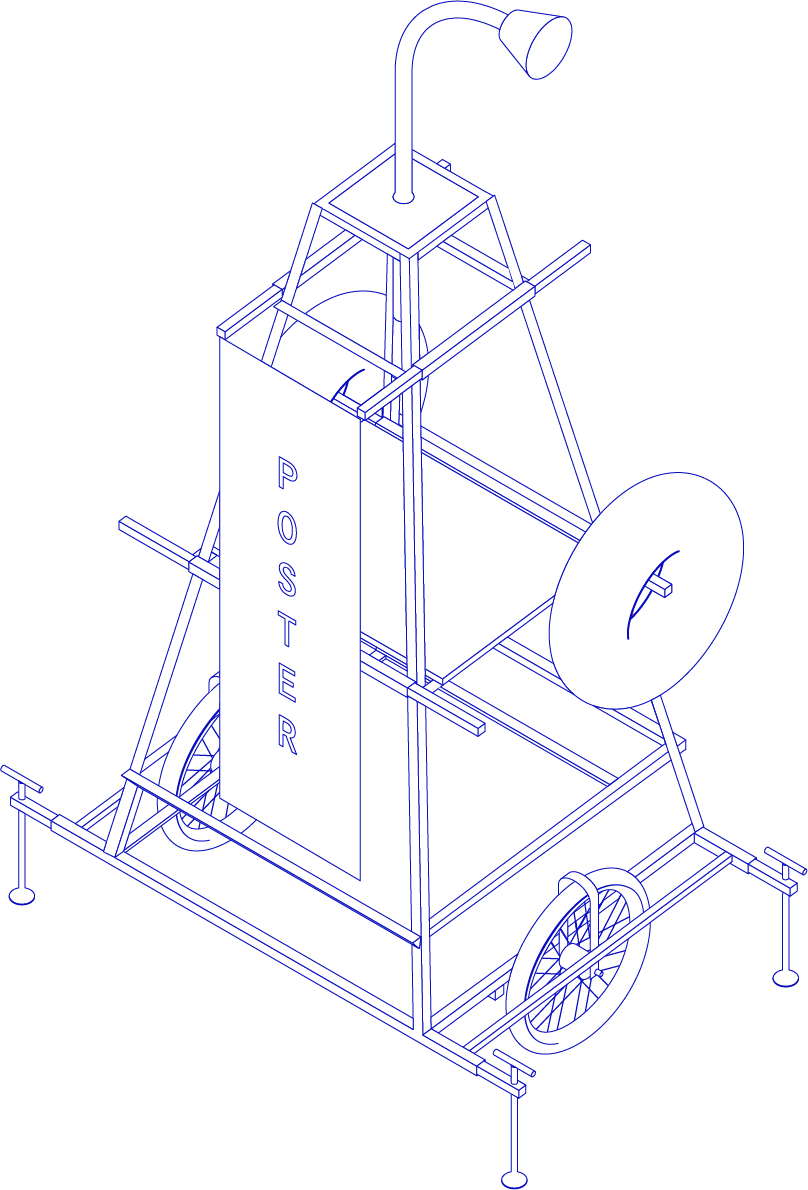 The Faro opens the way for this extraordinary caravan. With its long
neck it emerges on the horizon, turns its head, lights up the road. It is
covered in symbols, it communicates to the eye. It brings with it new
images for the city, projects them onto walls, scatters them like confetti.
It becomes the banner of a different way of understanding the
public, an eye capable of illuminating what appears to be hidden to
most. The Faro is a traveling visual communications tool. It is made
up of a metal trellis on wheels. It is equipped with adjustable luminous
sections, signaling elements and reflectors to which, if necessary, a
projector or amplifiers can be added, in order to organize a party or
small outdoor cinema. On the framework of the structure there are
flyers, drawings and posters; on its base a trolley and seat, a container
for objects and people. Lungomare will bring along blow-up rubber
rings and mattresses, inflatable furniture to set up unexpected events
and public actions. 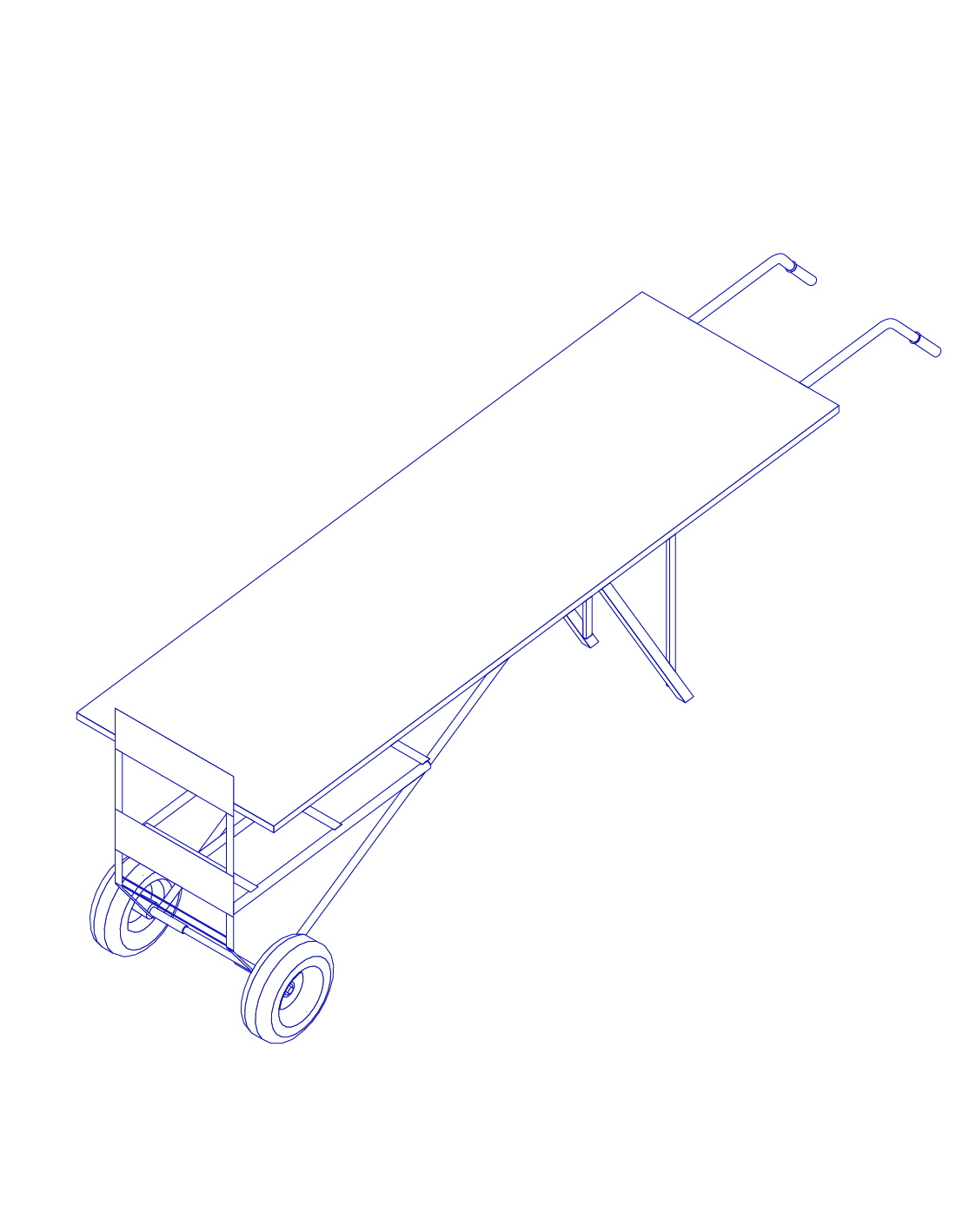 The Bravetta is a mobile table, a tool for both work and collective
idleness. It moves through different neighborhoods of the city
until it finds the right place to stop and create moments of conviviality.
An outdoor lunch, a sewing club, reading the newspaper,
drawing, a public meeting: Opinions are exchanged around a
table, knowledge is shared, experiences and cultures are mixed.
After all, it takes very little to feel at home somewhere, and in
this case the richness and diversity of the city is gathered around
a domestic element. The Bravetta is a long table on wheels. It is
made from a sack trolley (bravetta) that has been modified to
travel horizontally, with a retractable stand that acts as a support
when parked. When not in use it can be stored vertically or used
as interior decoration. 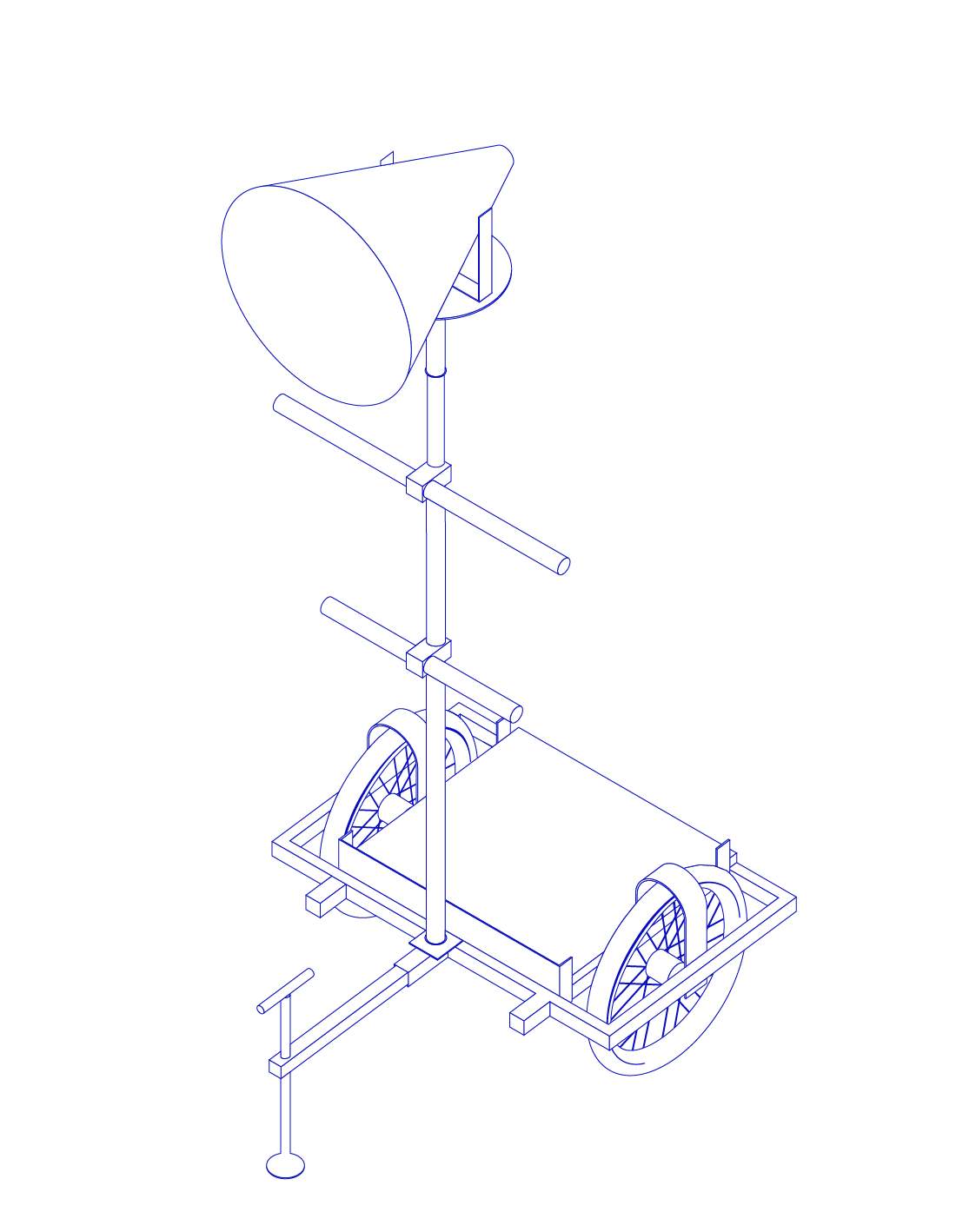 The Strillone has a slim outline but is the loudest of all the
Co‑Carts. It walks the streets, shouts, calls, warns, entertains,
informs. It can extend itself above the crowd, making heard the
voices of those who have none. Creating moments of public dialogue,
a spontaneous speakers’ corners moving around the city.
Agile and slender, its platform can accommodate one person, for
whom it temporarily becomes a visual or auditory prosthesis. In
fact, if necessary, the voice can change into a look: On nights with
clear skies, a telescope to see far away; In moments of celebration,
a kaleidoscope that reinterprets and upturns reality. The Strillone
looks like a long-limbed walking megaphone. Equipped with
wheels and knobs, it goes on marches, makes public announcements,
clamors for freedom of expression.